Retiring Deputy City Manager Rick Naimark Looks Back and Ahead 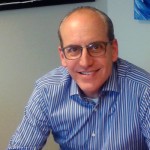 Deputy City Manager Rick Naimark has been a key staff member working in and around the Phoenix City Manager’s office for nearly three decades. As of June 12 Naimark will be retiring from the city to pursue the next big thing in his career.

Known for his diplomacy and keen ability to navigate thorny issues and articulate complex challenges and opportunities, Naimark’s time in the City Manager’s office has coincided with the passage and implementation of many of the essential large scale initiatives that have been key to the rise of our vibrant city: arts and culture infrastructure, parks, light rail, redistricting, etc. You name it and Naimark has been there, working in the trenches helping to lead what is now the sixth largest city in the U.S. to remarkable new heights. The Road to Phoenix
We stopped by his office to talk with him about how the city has evolved during his tenure, and find out what drew him to a life of public service.  He was born at Walter Reed Hospital in D.C. but his army doctor father retired and the family moved to Salem, Oregon soon after to take a job in state government. His father was very interested in public issues and used to spend occasional lunch hours at the legislature, listening to policy debates and observing the processes of government. Rick grew up participating in dinner conversations about public issues and public service, so he was well primed for a career serving the public good.

He received his BA in Public Policy from Stanford University his Master’s in Public Policy from Harvard’s Kennedy School. After finishing his graduate program in 1986, he applied to a variety of internships in cities across the country. The first interview was in Phoenix. It wasn’t until he talked with other internship candidates that he learned that Phoenix had an excellent reputation for being a really well run city. He’d been seriously considering other opportunities, but had an inkling that Phoenix could be an interesting place to gain experience.

When Phoenix made him an immediate offer, he and his wife Dana decided to say yes to the one-year internship and see what would happen. In July 1986, he began the one-year plan that evolved into a remarkable 29-year career.

What is a Council-Manager City Government?
Phoenix operates with a council-manager form of government, which means that the mayor and city council members are elected by the people to set policy for the city. The mayor and the city council hire the city manager, who is charged with running the day-to-day operations of the city and advising the mayor and council about these operations when they make policy.

Naimark admitted that creating this bridge has been one of his strengths. “I like to solve problems. Sometimes things look unsolvable, but there’s always a way.” He adds, “Through the years, I’ve been focused on informing elected officials on the issues and giving them a clear understanding of the potential implications of policies on running the city.”

30 Years of Impact
Naimark has been involved with all three significant bond issues (1988, 2001, and 2006) and the Parks and Preserve Initiative, which created the Capital Improvement funds the city used to invest in the city’s arts and culture infrastructure, and the parks and mountain preserves, including the expansion of the Phoenix Art Museum, the building of the new Burton Barr Library, the renovation of the historic Orpheum Theatre, the new home for the Arizona Opera, and so on. He’s particularly proud of the parks and mountain preserves that have been created during his tenure.

“In my experience,” said Naimark, “people in Phoenix have always been very collaborative. Everyone tries to work together to move the city forward.” And he has loved his job. “I’ve gotten to do a lot of different things, and had the chance to work with some great city managers, mayors, and council members.”

When asked about Naimark’s impact, Mayor Greg Stanton said, “Rick Naimark has done it all at the City of Phoenix and he’s done it very well. So many of our most significant and innovative projects — like GRID Bikeshare, Civic Space Park and ASU Downtown — have his fingerprints. Phoenix is a more livable city because of Rick Naimark.”

Current City Manager, Ed Zuercher said, “Rick Naimark loves Phoenix and understands the power of local government to make the community better every day. The list of projects he worked on is impressive: from transportation to recycling to Plan Phoenix, just to name a few.  And he always did the work with a positive, engaging attitude.” There isn’t enough room to cover every City project that has benefitted from his commitment, but a few additional areas are important to mention: he was a leader in recent pension reform efforts and in developing the transit and street plan that is on the August 25th ballot; he’s overseen a variety of city departments, including Parks and Recreation, Human Resources, Public Works, and Planning and Development; he was involved in the development of the downtown biomedical and ASU campuses; and twice he managed the citywide redistricting process that happens every ten years. “Redistricting is a complicated process,” said Naimark, “but it gave me real insight into just how much more diverse the city has become over these last thirty years.”

Beyond City Hall
Respect for Rick goes beyond City Hall. Long-time colleague and friend, David Krietor, CEO of Downtown Phoenix Inc., said, “Rick comes from a time when people made a commitment to public service because they were true believers in what we could accomplish by working together. Phoenix is a better place because of the commitment he made to us.”

Downtown Voices Coalition Chair, Tim Eigo added a community perspective. “He is a true #dtphx friend, one of those in City Hall who ‘gets it’ when it comes to an urban, walkable, livable downtown. His leadership will be missed, but fortunately, he and his family will remain great Phoenix neighbors.”

Four years ago Rick and Dana moved from Ahwahtukee to the Historic Roosevelt neighborhood and “it was like moving to a different city.” That’s one of the things he enjoys about Phoenix. “There are a lot of different ways to live in this city.” He’s clearly enjoying his new urban way of life and can frequently be spotted tooling around downtown on a bright green GRID bike or riding light rail to City Hall.

What’s Next?
Naimark’s wife Dana is the President and CEO of Children’s Action Alliance and they have two grown sons. Rick’s commitment to public service has always gone beyond just his professional career. He’s served on many boards, including Valley of the Sun United Way, Jewish Family and Children’s Services, The Arizona Science Center, and Hospice of the Valley. While Naimark may be retiring from City employment, he’s not ending his dedication to service. He’ll take the summer off, but hints at a possible second career serving the public starting next fall. He closed our interview by saying “The three pillars of a balanced life are work, family and community involvement.”

I expect Rick Naimark will be serving the community for many years to come.