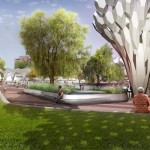 Everyone agrees that a walkable, vibrant downtown with memorable places to live, work, and play would be a good thing. There seems to be much less of a consensus on what that means, in physical terms, and how you get there.

We have been trying for decades, at least since the 1970s, to revive downtown Phoenix following the suburban flight that occurred after World War II. I recall in the early ‘80s tracking all of the exciting new developments downtown, and how, collectively, they were going to do the trick. Anybody remember the French Quarter? The Mercado? The Mile-High Tower? These, and many others, were examples of a top-down approach to what we now call “placemaking,” the attempt to create buildings, spaces, or streetscapes that people would love because of their unique appeal, comfortable ambiance, and vibrancy.

All of our failed attempts at placemaking have common elements. First of all, they tend to be ideas hatched by a single person or small group, grasping for a unifying concept that looks, on its surface, likable. Not recognizing the positive aspects of their place, they attempt to evoke a different place; something else, or somewhere else that is already loved. Who doesn’t like the excitement and street life of New Orleans, or of a Mexican market like in Nogales, or the prestige of having the tallest building in the world? Build it and they will come, they say, because it will be so cool that it will sell itself.

These developments tend to have a grand scale in an attempt to create their own context. Civic Plaza, the basketball arena, and the baseball stadium each were supposed to “fix” downtown in one bold stroke. Arizona Center went to the grand scale as well, but more successfully. The appeal of a mega-development is understandable from an economic perspective – you can get a whole lot done in a short period of time, and stretch your funding as far as you can. The problem with grand-scale projects is that they tend to become monotonous and uninteresting, particularly after a few years when the novelty wears off, and lack the fine-grained texture that great places have.

None of the failed attempts at placemaking had broad community support, and that was their downfall. Of course, in the early years of rebuilding downtown, there was little community there to provide support. So instead, the developments were geared toward an imaginary “customer,” a.k.a. future downtown resident or patron. Unfortunately, most failed because they did not attract the forecast customers.

Today, we are fortunate to have developed a larger constituency for downtown, people who already live here, already work here, and who are strong advocates for their downtown. And those people are the key to finally re-making a successful center city.

Successful placemaking requires building community consensus: ground-up, not top-down. The top-down approach is much easier, but the results speak for themselves. Ground-up means you have to ask people what they want – and to get a meaningful response, you have to actually engage in a dialogue, because most people really have not thought that much about what they want their city to look like. That’s hard, and that’s why you so seldom see it done.

I look to the new Hance Park planning effort as an example of how community consensus building can work. They got the community involved, they asked the right questions, and from that data created a plan that contained the elements that people want – and likely will use. Time will tell, but I expect that the next generation Hance Park will not appear on a failed-developments list.

Placemaking also requires cooperation. When individual property owners look only within their own boundaries, and propose developments without integrating into their context, opportunities can be wasted and good places can be destroyed. As we enter the next boom cycle of building downtown, developers have been proposing projects without public input – living within their existing land rights, not because they are being good neighbors, but because it’s easier, and more definite, than engaging with the community. Gauging from the groundswell of resistance, these developments don’t appear to be making the kind of places that the community wants.

We have the opportunity to create a community vision that can serve as the measuring stick for new developments. We can ask that projects respect their historic, geographic, and social context into which they are built. It’s hard – but the results would be worth it.