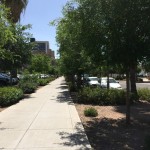 The Central Avenue corridor of Phoenix is unique as a primary formgiver for our city; rather than a traditional radial city development, where a city grows in concentric rings out from a center, Phoenix has a highly unique and valuable linear basis. The linear development is a natural result of the primary Central Avenue corridor, which connects the two primary mountain space parks—South Mountain Park and North Mountain Park, two highly visible natural monuments for our city. The Central Avenue corridor connects downtown and midtown and many of our historic neighborhoods including the historic Murphy Bridal Path north of Bethany Home Road, with its distinctive historic path and exposed canal banks.

City planning has reinforced this strong asset by locating major cultural venues on Central Avenue such as the Phoenix Central Library. One of the primary city open spaces is Margaret T. Hance Park, also known as Deck Park, which straddles Central. We are now at a point where focused city and development planning can significantly add to our livability by locating linear open space/bike/walkways that connect downtown to the significant Deck Park open space, enhancing central Phoenix residential development. Second Avenue and Second Street have great potential to be developed as a pair of linear park/walks that will further enhance city living. This system should be extended from downtown to connect to Deck Park—and beyond. The major highrise developments along Central Avenue would then be flanked with parklike linear walks that could provide a buffer to the adjacent, largely one-story neighborhoods, and connect them to the major public open spaces of Deck Park.

Recently, plans have been developed to provide a pedestrian path parallel with Central Avenue along Second Avenue, west of the Downtown YMCA. This shows the potential and quality of life that comes from such an urban amenity. This is a great example of implementation that reflects a larger, important element of public space—how connected urban spaces benefit people living there to interact with nature and each other.