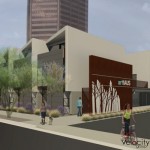 Phoenix’s Midtown District is known for its collection of artistic venues, including the Phoenix Art Museum, The Heard Museum, and The Arizona Opera. By next spring, that list of artful spaces will grow with the addition of a new architecturally unique residential project called ArtHAUS. ArtHAUS will fill in a portion of the vacant lot on 1st Avenue, near Central Avenue and McDowell Road. It will feature a total of 25 units, including seven three-level townhomes, 15 two-level lofts, and three single-level flats. The project will break ground this month and is anticipated to be completed by May of 2016.

According to Jason Boyer, the architect and developer of ArtHAUS, the concept behind his project is to “provide an attainable, well-designed, well-located urban infill residential choice.” Light Rail and several Central Arts District destinations are in the near vicinity.

ArtHAUS residents will be able to live in an artistic and thoughtfully-designed urban dwelling in the cultural center of Phoenix, with easy access to light rail and the many restaurants, galleries, shops and events that are drawing more and more people to Downtown Phoenix. Boyer has lived and worked in Phoenix for the past 20 years and was inspired by the transformation he’s witnessed downtown. In that transition, he also saw an opportunity. “As I’ve watched it mature, obviously one of the things that’s been missing is residential opportunities.”

Greg Kilroy of The Velocity Group real estate team is the sales representative for ArtHAUS, rounding out a team that is dedicated to enriching Downtown Phoenix with artfully designed spaces that contribute to the soul of our city.

ArtHAUS caters to the need for residences that are tailored to the true needs of the community and the people who want to live there. As a believer in context-based design, Boyer designed ArtHAUS to blend with the existing neighborhood and to be optimized for community-building.

“We wanted to be a good neighbor and a complement to the neighborhood, paying attention to scale and how the units address the street. And creating a place that had the ability to build a sense of community amongst its residents,” says Boyer. All the units within the building are connected at the second level with courtyard spaces. “You can sit out and have coffee and conversation while neighbors are going to work, walking their dogs,” says Boyer.

The design also complements our regional climate, with large overhangs and the use of glass within the units that maximize the Arizona indoor/outdoor feel. And according to Boyer, the interiors of the units are created to be as multifunctional as possible. For example, smaller units have islands that double as a dining table: “The kitchen tends to be the gathering point anyways, so why not make that the centerpiece?”

Boyer’s focus on attainable, well-designed living spaces was inspired by Phoenix, but he also took some cues from projects in Southern California, where “a more attentive eye to design and the living experience” proved to be favorable amongst buyers. Boyer hopes to infuse this idea into Downtown’s fast-evolving residential landscape. Interior rendering of Unit A.

Boyer and Kilroy hope to attract a variety of residents to this project. “We would truly love it to be mixed, really a representation of what we want downtown to be.”

ArtHAUS is set to be an architectural point of interest in Midtown Phoenix, contributing to the personality and value of the neighborhood, while creating a sense of place for those who live in and around it.

The sales center for ArtHAUS is located in the Porter Acme building at 1425 N. 1st Street. You can find out more about the development and make reservations at arthausphx.com.