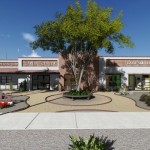 Ashley Harder, President of Harder Development announces her second downtown adaptive reuse project – Carline Center, which is located on the NE corner of Roosevelt Street and 11th Avenue. The building name pays homage to the streetcar line which once ran through the neighborhood. Rendering of the Carline Center

The Carline Center property, which is part of the FQ Story neighborhood between Roosevelt and Grand Avenue, was originally two houses built circa late 1920’s. In the 1960s, the buildings were merged with an addition that brought the total area to 5,000 square feet. The .374 acre/16,500sf site also has ample parking. The space has been vacant for the past 5+ years. The construction process to remodel the space into two open-feeling, professional suites, as well as give the entire building a facelift,  will begin over the next several weeks. The adaptive reuse project will have a heavy focus on activating the street by utilizing welcoming entries that open to Roosevelt and creating a patio and outdoor shaded areas. The Harder Development team will be tracking the project process with both photographs and video. Synectic Design Inc. architecture firm and Ameris Construction have been contracted by Harder for the Carline Center project.

Ashley Harder says, “We are very excited to bring new life to this interesting building that has sat vacant for many years. The greenest building is a building that’s already there, and Harder Development is committed to adaptive reuse projects that will compliment and add value to these important historic neighborhoods.”