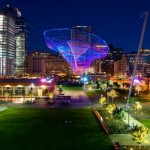 As Phoenix begins a multi-month celebration of the 30 year anniversary of the Arts & Culture Commission, DPJ will share a series of articles that highlight the impact the Commission has had on the look of our city, the growth of our arts organizations, and the evolution of arts learning.

Thirty years ago this month, Phoenix city leaders had the foresight to pass a City ordinance that created the Phoenix Arts Commission (later renamed the Phoenix Arts and Culture Commission). The ordinance, unanimously accepted by then-mayor Terry Goddard and the City Council on April 16, 1985, called for a Commission to “protect, enhance, serve, and advocate excellence in the arts for the people of Phoenix in their City.” On Friday, April 17, the Phoenix Arts and Culture Commission will launch a multi-month celebration of all that the City and the Commission have accomplished in these first three decades. The inaugural event, “Phoenix Arts & Culture @30: A Conversation” will be held from 7-8:30 p.m. at the Phoenix Art Museum and will include Mayor Greg Stanton, former Mayor Terry Goddard, arts leaders James K. Ballinger and Black Theatre Troupe Executive Director David Hemphill. They will be joined by former commissioner F. William Sheppard, first executive director of the Office of Arts and Culture Deborah Whitehurst, first public art director Gretchen Freeman and current public art director Ed Lebow. Arizona Poet Laureate Alberto Álvaro Ríos will moderate.

The Phoenix Arts & Culture Commission is comprised of a minimum of 18 commission members (currently there are 22) who serve in three-year terms. Over the first 30 years, the Commission accomplished a lot, and there’s much to celebrate in three overarching areas: public art, arts learning programs, and grants to arts and cultural organizations. Ongoing celebratory activities are being planned for this summer and into the fall, culminating with a day-long festival in October. To coincide with celebration elements as they unfold, DPJ is planning a series of articles to cover it all, beginning with the program that has had the biggest visible impact on the city, Public Art.

The City ordinance establishing the Commission allocated one percent of the overall Phoenix Capital Improvement budget for public art and the funding was backed up by three major bond initiatives (1989, 2001, 2006). The results over the last three decades have transformed Phoenix. Gail Browne, Executive Director of the Office of Arts and Culture

Current Public Art Director Ed Lebow says, “It began with the idea that quality design belongs to every neighborhood, and that all residents deserve to have wonderful design as a part of their public spaces.” This meant that, as Phoenix was growing and infrastructure was being built, artists were involved in projects from the beginning to insure that the results would be more than simply functional.

At first this program was a little confusing for the public. As Lebow puts it, “We were hiring artists to do things that very few people expected them to do: design streets, freeway overpasses and underpasses, pedestrian bridges, bus shelters, and more.”

Browne adds, “In the beginning I don’t think there was a full appreciation of what the overall impact would be.” But she notes that along the way, the successful proliferation of so many projects began to change people minds.

“Attitudes in City Hall began to change, as well,” adds Browne. “Other City departments began to understand how these projects were enhancing the city and making the projects they were responsible for more accessible, more safe and more beautiful.” Over the years, the impact of these projects was felt far beyond Phoenix. For example, the innovative 27th Ave. Solid Waste Management Facility, which was designed in 1989 and completed in 1993, began garnering national attention and awards, and helped change the way people throughout the country thought about this kind of facility.

To date there have been 170 completed Public Art projects citywide and many others are in development. They’ve included streetscapes, parks, pedestrian bridges, freeway over and under-passes, canal improvements, and so much more. At Friday’s event, the panelists will discuss these projects and share how this internationally respected program has successfully integrated beautiful design into the bones of the city.

“What once was new and novel is now normal,” says Lebow. Recent award-winning projects include the Downtown Civic Space Park sculpture “Her Secret is Patience,” which has become an icon, as well as the Phoenix Sky Train terrazzo floors at the 44th Street Light Rail Station, the East Economy Station, the Terminal 3 Station, and the Terminal 4 Station. In April 2013, the National Terrazzo & Mosaic Association awarded “Job of the Year” to these remarkable floors. As Browne says, “Who’d have thought that just creating a walkway for people could be such a symbol for the city and that it could be so welcoming?”

The panel offers the public an historic opportunity to see the impact and hear from the people who’ve been involved in the Commission over the years. Browne adds, “People will come away from this panel discussion with a real sense of pride in the degree to which we are all invested. They’ll see the contrast between a city that had very little investment in arts and culture, and they’ll understand that a broad community effort was what drove this success.”

What: “Phoenix Arts & Culture @30: A Conversation”