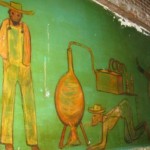 Portrait of DeGrazia (courtesy of the DeGrazia Foundation)

Iconic Arizona artist Ted DeGrazia is most widely remembered for his commercially popular paintings of large-eyed children, faceless angels, and Southwestern-themed imagery. But two murals he left behind in downtown Phoenix—hidden under protective sheetrock for years—reveal a glimpse of DeGrazia’s other subjects, and his unique mark on the community.

“A lot of times, DeGrazia would go into a place and someone would say to him, ‘Oh, here’s  a sandwich and a pitcher of beer,’ you know, ‘Would you paint me a picture?’ and he’d do it for lunch,” says DeGrazia Foundation Executive Director Lance Laber. “Now, this is a pretty extensive mural, so I know he didn’t do it for lunch,” he continues with a laugh. “This mural is 12 feet tall and it’s 40 feet long.”

Laber is describing a mural covering a large expanse of interior wall at 222 E. Roosevelt in the former greenHAUS Gallery. “The establishment was a bar,” he says, and explains that the murals were most likely painted around 60 years ago. “….They go along with the way DeGrazia’s style was in the ‘50s.”

On the Roosevelt walls, a smaller mural shows a dancer twirling in a glass, while the huge 40-foot work depicts scenes of alcohol production, from loincloth-clad figures gathered around a cauldron to a hillbilly moonshine still. “Everybody’s making some kind of booze,” says Laber. “That seems to be the theme of the mural.” Both pieces feature opaque greenish-turquoise backgrounds, and while the dancer is painted on drywall attached to wood studs, the alcohol scenes were applied directly to a very thin layer of plaster adhering to a double- brick wall. For years, the artwork was covered and protected by sheetrock and Laber learned about the murals when building owner Baron Properties contacted the DeGrazia Foundation back in September 2014. “I had never seen anything by DeGrazia that looked like that—truly amazing,” says Laber. “The murals are kind of old…they’re a little faded from time, but they’re very interesting.”

“We learned of the two pieces as we were conducting our due diligence to buy the property,” says Baron partner Scott Fisher. “We called Lance [Laber] to understand what the murals were and what they stood for and their importance.” He continues, “We wanted to do the right thing and…donate the paintings, so that’s why we called the DeGrazia Foundation.” Baron has owned property in the Valley since 2004 and intends to build a new building on the Roosevelt site, but the company has worked out a rare opportunity with Artlink in which the DeGrazia murals will be open to the public during March First Friday and Art Detour 27 from March 6-8. “We don’t just share a desire to preserve the DeGrazia artwork,” says Fisher. “We want to do what we can to actually enhance and expand a great arts neighborhood with additional efforts too.”

Laber has been working with Baron and an art conservator to determine how the murals can be preserved, and believes the smaller mural can be saved. “That’s on a piece of sheetrock that we believe can be removed from the wall,” he says. The larger mural is a different story. No one has yet devised a method to protect such an expansive piece against the torque exerted on a thin layer of aging stucco. “If you start trying to peel it off or get behind it and get it off, you’re probably just going to break it into a thousand pieces,” says Laber.

“In either case, we plan on having a professional photographer take very high-definition photographs and donate those to the Foundation and whoever else is interested,” says Fisher. “We understand that the Roosevelt Arts District is very important, and so our new projects on Roosevelt…we plan on displaying and highlighting local art from local artists. Our plan is to have more artwork, not less.” And the beautiful Lauren Lee mural “Three Birds” on the building’s outside east-facing wall? Lee recognized that it was going to be difficult to save the piece, so she approached Baron Properties about the possibility of producing a new piece for the new building.

Fisher said, “When Lauren Lee approached us with her idea, the answer was a resounding yes. That’s because our goal is to create a combination of the preserved art along with the newer works and contribute to a great success story in the heart of Phoenix.”

Lee said, “I’ll be painting three massive birds in flight on the five-story-high new building that will be called ‘iLuminate.’ Given their name, the developer suggested that we illuminate the birds from below so that they can be seen from far away, which I think will be spectacular.”

Lee added, “The new concept design will be displayed at Art Detour this weekend in a pop-up art gallery hosted by Artlink in the greenHAUS building. I’ll be there answering questions with the new painting and design rendering of the ‘Three Birds in Flight,’ as well as offering prints of the ‘Three Birds’ mural for sale. It’s difficult to convey my happiness about this, but I am truly happy that the ‘Three Birds’ get to live on in a new way, in a new stage of their evolution.”

Take advantage of this final opportunity to see the DeGrazia murals and Lauren Lee’s “Three Birds” at Art Detour this weekend.

Update: Recently released, DeGrazia: The Man and the Myths is a new biography of DeGrazia by James W. Johnson and Marilyn D. Johnson from The University of Arizona Press. Both authors join DeGrazia Foundation Executive Director Lance Laber at the Tucson Festival of Books on Sunday, March 15 in the Student Union’s Kachina room on the U of A campus for a panel discussion from 1 p.m.-2 p.m., followed by a book-signing.