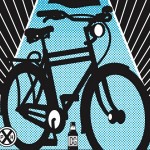 The inaugural DeTour de Grand will take place on Sunday, March 8, 2015 from 10 a.m. to 5 p.m. on Historic Grand Avenue in downtown Phoenix. Organized by the Grand Avenue Members Association (GAMA) in conjunction with Artlink’s Art Detour 27, the daylong bike tour, art walk, and block party will feature the best in local bikes, beer, and bands.

“The aim of DeTour de Grand is to highlight ‘local Phoenix’ along one of our city’s most iconic and authentic streets, Grand Avenue,” said Kirby Hoyt, event co-organizer and principal of Edge Industries, a landscape urbanism firm headquartered on Grand.

According to Laurie Carmody, GAMA member and event co-organizer, “For years Grand Avenue has been a gathering place for musicians and music lovers. In 2011 the Roberto-Venn School of Luthiery moved to Grand Avenue due in part to its music tradition and eclectic character. Inspirations in creating DeTour de Grand are the amazing students, who come from all over the globe to learn how to make and repair guitars at this world-renowned school.”