Lifeblood of a Desert City 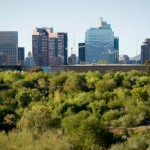 The presence of water in the desert has great significance because of its scarcity and its life-giving qualities. Water is the lifeblood that has allowed Phoenix to grow and flourish over the past 150 years. The canal system fed by the Salt River and Colorado River currently sustains over 4 million people in our metropolitan area. And yet our urban form is largely disconnected from the river corridor and canals that have given life to our desert city. The dry Salt River bed became an industrial wasteland through much of the twentieth century, and the canal system was treated as a utilitarian alleyway that we turned our back on. Both became “leftover” spaces and a no-man’s land that divided neighborhoods. Over the past decade, we are in the midst of rethinking how we connect to these waterways through several strategic plans.

The upcoming $5 million redevelopment of the Grand Canal in Uptown represents a significant opportunity to change how we treat the canal system in Phoenix and to attract waterfront development. Flowing water can become the urban connector that rebuilds linkages to surrounding neighborhoods and spurs significant infill development at key nodes.

Additionally, Phoenix’s Rio Salado habitat restoration presents a tremendous opportunity to transform our city and heal the scar that the dry riverbed had become. The $100 million habitat restoration along a 5 mile stretch of the Salt River created a 600 acres of Sonoran riparian habitat with multi-use trails and wildlife viewing areas. The Rio Salado Audubon Center provides an anchor and a gateway to the Rio Salado. Now, the critical next step in the urban transformation of the Rio Salado will be the creation of thoughtful new community oriented development along the banks of the river. The Del Rio Area Brownfield Plan and the SoPho Between the 7’s Plan both create guidelines to help shape redevelopment. Future development in this area should be bold in the effort to create community centric urban plans that build on the rich cultural heritage of South Phoenix and strengthen connections to Downtown.

Ultimately, one of the measures of Phoenix reaching its true potential as a “great desert city” will be the way we recognize and reconnect to the waterways that have been our lifeblood. We have made significant strides over the past decade to start this transformation. Now, we must foster thoughtful community oriented infill development to stitch our community together and to cultivate our vibrant urban city.