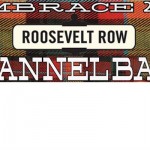 While the east coast celebrates the ball drop in New York Times Square, downtown Phoenix locals will ring in 2015 in their own creative style – with the first ever New Year’s Eve Flannel Ball, hosted in an art-activated alleyway in Roosevelt Row. With attendees dressed head to toe in flannel under the Phoenix night sky, this event is poised to become a favorite downtown tradition, celebrating the uniqueness of the downtown Phoenix arts district.

“Arts is the foundation of this community,” said Nicole Underwood, Director of Operations for Roosevelt Row CDC. “This inaugural art-activated celebration will be a fantastic way to ring in the New Year, with so many reasons to celebrate our area’s local creative culture.”

To date, Roosevelt Row CDC has created vibrancy in downtown Phoenix by activating typically vacant spaces with art, such as converted dirt lots into community gardens, repurposing shipping containers into art galleries, and now hosting an event in an alley way with music, art and local culture. Roosevelt Row will bring together Arizonans and visitors from across valley to activate an alleyway in the arts district, where people can congregate for New Year’s Eve to hear a lineup of up-and-coming local musical acts, experience “New on Old” Art Show with over 50 proud participating artists from Phoenix, enjoy food trucks, lawn games, a photo booth, a beer garden provided by New Belgium Brewing Company and other notable traditions that make the Flannel Ball a unique New Year’s Eve experience.

From 9:00 pm to 2:00 am New Year’s Eve night, an alleyway on 6th street and Roosevelt will come to life to ring in 2015, with an original New Year’s countdown hosted by Phoenix Mayor’s Art Award 2014 Recipient and host of Phoenix Storytellers, Dan Hull. The climax of the year concludes with the drop of an odd and campy Lawn Gnome Pinata.

Tickets are $15 and available for purchase at Lawn Gnome Publishing on 5th Street and Roosevelt or online at www.eventbrite.com. Admission is $20 day of the event. Tickets are limited.