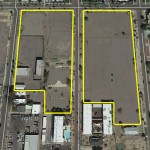 If you’ve been to The Fillmore Vig or Cibo, you’ve probably noticed the giant chunk of empty land south of Fillmore between 6th Ave. and 4th Ave. This expansive 7.5 acres is the former site of the Thomas J. Pappas School, which was closed in 2008, and is about to become largest downtown parcel to come available since the Arizona Center was built in 1990.

Most of the site is owned by the City of Phoenix, while a small portion is owned by Maricopa County. Over the last several months property owners and community leadership have begun to examine the site and create a vision for this part of South Roosevelt that would make this site a huge catalyst for that part of the neighborhood; that plays off of and responds to the Urban Form Code, which emphasizes the pedestrian-friendly, urban design we have to have here in downtown; and that truly responds to the desires of the community surrounding the site and the greater downtown.

To get a better understanding of this process, we spoke with Dan Klocke, Vice-President of Economic Development with Downtown Phoenix, Inc. ” The whole idea is not just to throw out an RFP for the largest piece of land in downtown, the idea is to be thoughtful, to work through what could happen….,” said Klocke. “We want to make sure that it’s true urban development that stimulates more activity in the west side of downtown, that it (the RFP) takes full advantage of having this size of parcel…to leverage as much as possible.” Klocke points out that with a parcel this size it is critically important to “make sure it’s economically viable, so the development community says ‘yes this is a really good opportunity and it makes a lot of sense’ and that the community says, ‘this is going to be a great urban development for our neighborhood.'” The process to get the RFP right began with conversations with the property owners in June and July. Then Downtown Phoenix CDC received funding through LISC (the Local Initiative Support Corporation) to hire Ayers Saint Gross, a national planning company with a lot of combined experience building projects in downtown. They have been looking at conceptually how this could lay out, and how to make it meet the economic reality of urban construction. “These are folks that get urban and that’s why we picked them. They understand the Urban Form Code, and they get what its intent is,” said Klocke. “They know how to structure the elements of the RFP so that it works both from an urban design perspective, and from a developers’ perspective.”

In addition to Ayers Saint Gross, they hired Belfiore Real Estate Consulting, a market research firm, to assess what’s doable: What’s the market in downtown? How does that match up with construction costs that they’re looking at for these conceptual plans?  Klocke emphasized that the concepts being created are not what will get built, they are simply there to show what’s possible. “It’s more of an exercise to show that it can happen, and that it can be good and urban,” said Klocke. “These concepts will be part of the eventual RFP,” he continued. “So the developers can see that A) a lot of work had been put into this and, B) the principles of what we expect to happen there are laid out in both words and drawings.” Some of these principles include stated density levels, an east-west thoroughfare to break up the super blocks between Fillmore and Van Buren, and better circulation in the neighborhood, which will allow people to cut across this part of downtown.

The next stages of the process are that the city and the county have to get together and make sure that everyone is on the same page. When you put out an RFP it’s much easier when you’re dealing with one entity, such as the city. Additionally, the county can’t sell property, unless it’s at auction, or unless it’s to a municipality, and the city has both the wherewithal and experience to do it. To simplify the RFP process, the Phoenix Industrial Development Authority (Phoenix IDA) is looking to purchase the county piece. On Wednesday, December 3, the Downtown, Aviation and Redevelopment Subcommittee will be asked to give its approval that the Phoenix IDA can purchase this property, then it will go to the full council for a vote. Once that decision has been made there are several steps until the final RFP is released in February.

“Before the final RFP goes to the city council for approval,” said Klocke, “we’re going to go out to the communities and show them what we’ve been working on, and get their feedback. There will be a lot of bites at this apple over the next few months, where people can give their feedback.”