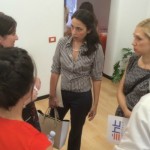 When Jenny Poon and I originally outlined the strategic vision of the CO+HOOTS Foundation, we decided one of the the impact areas would be called “CO+CHANGE THE WORLD.” I knew in my heart that we would do it, I just wasn’t aware it would happen this quickly.

We started our conversations last December and not a year later, we were on a plane to Catania, Italy and sitting face-to-face with Elisa Toscano, our Italian counterpart— a strong visionary young woman who won’t take no for an answer. Our presentation day was by far one of the proudest moments of my life as a Phoenician. I grew up in Phoenix, my backyard facing a mountain where we used to hike as kids while being wary of the snakes. Never in a million years did I ever think that one day I would be representing my city in international relationship building. There we sat with Phoenix Councilman Daniel Valenzuela, who had worked side by side with us and communicated on our behalf for weeks to acquire the necessary funding for us to go on the trip. (We received the necessary funding only a few weeks before the trip, so the planning went quickly and even required a trip to Tucson to get passports for some of our members.) On the morning of the presentation, we were greeted by several dignitaries, including the President of the equivalent to their chamber of commerce, the President of Confstartup (their entrepreneur incubator), and of course our new BFF, Elisa. It was very formal. There was a ton of press and it was a much bigger deal than we had anticipated. We later learned that we were featured in the paper and on their television news programs. At the presentation, we were each given the opportunity to talk about our businesses and I got to introduce and present with Jenny Poon. I have told many people this over the past 10 months of working with her, but I have never met a more strategic thinker than Jenny. She is one of the smartest business women I know. CO+HOOTS members Beth Cochran, founder of Wired PR Group, and Daniel Valencia of Levers also presented their companies. I was struck by the fact that while I work with them in the coworking space and collaborate with them on projects, it wasn’t until seeing them through other people’s eyes that I really understood how incredible that they are. I could tell that as we each presented, Councilman Valenzuela became increasingly proud that this was the representation that our city had to offer. That felt both validating and challenging at the same time. Via our conversations with the Italian entrepreneurs, we learned that the support we have from our local city government is unprecedented. They were in shock that we communicated with our Councilman via text message.

The President of the Commercico had some wonderful closing comments about how they want to follow what we are doing in Phoenix with pro bono service, B corps and a focus in coworking with a community. This is when I nearly burst into tears of joy. It was in that second that I recalled sitting at my kitchen table brainstorming with Jenny and throwing out the idea of creating global connections and expecting her to reel me back to reality, but instead she sketched out a little globe that said CO+CHANGE THE WORLD and we pinky-promised to make it happen. It’s surreal sitting in another country and having a very prominent businessman in the country say that they want to lead their city in the direction of a vision you put on paper. CO+CHANGE THE WORLD now didn’t seem like that lofty of a goal. In fact, with these kinds of innovators now in direct communication with each other, maybe it was too small?

That afternoon we took a tour of the new coworking space that they are launching. It is right on the Mediterranean sea. They seemed very eager to get our input on it. The enthusiasm and feeling of what “could be” was overpowering. We left with plans to connect, bring the Italians to Phoenix, and get them involved virtually with our community via our “SuccessLab” meetups and possible peer mentoring partnerships. We have plans to start that in early November with a possible CO+EXCHANGE to Phoenix in Spring 2015.

Catania is only one of the international cities planned for our CO+EXCHANGES program. In addition, we have plans for exchanges with Calgary, Canada and Hermosillo, Mexico within the year, as well as several US locations.

This week we bring our first visiting CO+EXCHANGER to Phoenix. Matthew Manos, a graphic designer and author from Los Angeles will cowork with us during Phoenix Pro Bono Week (Oct. 20-25).

This initial trip was generously sponsored by APS, AT&T, and Blue Cross Blue Shield of AZ who believe in our vision to CO+CHANGE THE WORLD and are all great supporters of bringing innovation to the Phoenix market to build community. Our goal is to conduct 12-15 CO+EXCHANGES in 2014-15, creating a global network of innovators all connected to our home city of Phoenix.