The Wood Fired Scent of the City with Aaron Chamberlin 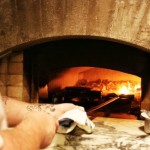 The aroma of fresh baked bread from Aaron Chamberlin’s uptown restaurant, St. Francis, entices pedestrians as they pass along the street. St. Francis opened near the corner of Camelback Road and Central Avenue in 2009 and the name honors the Phoenix neighborhood’s 1936 land deed, as well as the streets of San Francisco that inspired it. Chef-owner Aaron Chamberlin’s enthusiasm for urban life and love for the area’s historic charm has created a convivial, light-filled space with window walls open to the street and curbside patios, at once intimate and communal. A custom wood-burning oven takes center stage in the open arena style kitchen, baking up to 90 San Francisco style sourdough loaves a day. Its local mesquite wood infused flavor accents nearly all the dishes on the menu, from roasted meats, locally sourced vegetables, to the artisanal flatbreads. The rustic oven acts as the restaurant’s hearth, encouraging friends and strangers to gather together to break bread.

Chamberlin admits his expertise at cooking with fire was developed long before his professional career. “I love to cook with fire. I was in the Boy scouts, made Eagle Scout, and my skill for wood burning started with those campfires. The experience shaped me.” His talent for mastering the art of the flame has garnered acclaim in such national publications as Condé Nast Traveler, Food & Wine and Sunset magazine.

A local boy, Chamberlin left home at 19 to earn his chef’s whites in the culinary capitals of San Francisco, New York and Boston. He spent nearly a decade on the road and in the kitchens of such famed and exacting chefs as Michel Richard, Jean-Georges Vongerichten and Nancy Oakes. He returned home with serious fine dining credentials, a deft touch for bread making and a taste for the urban vibrancy of those cities: small cafes, independent book sellers, corporate offices, family run groceries, and pop-up art galleries all sharing the same sidewalk. “When I moved back home,” says Chamberlin, “I grabbed a map and zeroed in on what I thought was the center of town – Central and Camelback. I was looking for that vibe. But nine years ago it was still waiting to happen.”

He kept his eye on the area and over time he began to notice independent business owners opening up shop and felt that something was in the air, the wait was over. He searched until he found the right building to create the kind of restaurant he envisioned for the neighborhood and city he wanted to live in. The 1955 modernist classic at 111 Camelback Road had the right ingredients: good bones and curb appeal. “Before we started to remodel,” he says, “I took [noted local architect) Wendell Burnette on a trip to San Francisco.” They toured all of Chamberlin’s favorite haunts, dives and cafes sampling their essence in taste and smell. And they walked historic neighborhoods studying the dynamism of buildings, their curbs and the streets.

“I wanted that feeling of a real city, to see and be seen,” says Chamberlin, “for our restaurant to have a role in the street life. I was told I was crazy to do that. But I am not afraid to put tables and seating on the sidewalk. I lived in an alley in San Francisco for years and loved it. I want people to drive by, walk past, look in and want to be a part of it.”

An urban vibe, front porch charm and a merit badge worthy kiln. Chamberlin gently kneaded these ingredients into a sophisticated gathering place to share in the simple, nourishing ritual of breaking bread. In May, 2013, Chamberlin’s fire-making skills and talent for creating a fresh, eclectic menu with wide appeal led him to  open the Phoenix Public Market Cafe, at Pierce Street and Central Avenue in the Evans Churchill neighborhood downtown. Its central location, full bar, spacious tables, covered patio, and casual menu that features breakfast, lunch, and dinner items, has created another popular “see and be seen” gathering spot. In addition to the cafe, the Public Market parking lot is home to Food Truck Friday, a lunch time food truck gathering each week, along with an open air farmer’s market every Wednesday evening and Saturday morning. Just like a yeasty loaf of sourdough bread, Chamberlin’s dream of restaurants with a role in the city’s street life, is rising. Smell the deliciousness.