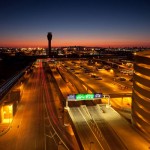 You may not be aware that last week, the FAA changed the takeoff flight paths at Sky Harbor to follow a corridor roughly over Grand Ave. The change is part of the FAA’s “NextGen” plan.

As a result of these new flight paths, F.Q. Story and other surrounding neighborhoods are now experiencing increased noise pollution from flights overhead between noon and 2:00 a.m. There was no advanced notice of this change to the public and a group of citizens are encouraging everyone to “make noise” to address the situation. Make Your Concerns Known. The City of Phoenix Aviation Department staff is working closely with the FAA on this matter. If you are concerned or would like more information, contact James Davies, Sky Harbor’s Noise Officer at 602-683-2669. He will make a record of the concerns to share with the FAA.

Attend a Noise Meeting. The City has scheduled a community meeting this week on this issue. This will be the first opportunity for public input. Residents are encouraged to attend and voice their concerns about the impact of the increased noise in the affected neighborhoods.