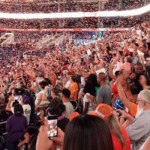 The Downtown Phoenix, Inc. (DPI) team received excellent feedback at our quarterly Board of Directors meeting earlier this week. In addition to a comprehensive overview of new development initiatives, we focused on events, membership, establishing our brand, and our work with Roosevelt Row and Evans Churchill to investigate the feasibility of creating a business improvement district. Our economic development partner, the Downtown Phoenix Community Development Corporation (CDC), has joined the Downtown Phoenix Partnership (DPP) in agreeing to a January 1, 2015 consolidation date. We continue to work with the Phoenix Community Alliance (PCA) on a similar arrangement.

Having our business, city, and community leadership at the same table focused on the future of downtown bodes well for the future.

USA Today named the Roosevelt Row Arts District one of the top ten best arts districts in the nation. Last year Roosevelt Row was spotlighted, again by USA Today, as one of the ten best neighborhoods that tourists haven’t found yet.

Bleacher Report named Phoenix the 13th best city (out of 25) to be a sports fan. Rankings were based on number of teams and events, success of teams in last five years, stadiums, fan passion, general fan experience, media, star power, and tradition and history.

Our Bleacher Report ranking should go up a few notches as the Phoenix Mercury completed a three-game sweep of the Chicago Sky on Sunday to win the third WNBA championship in team history. They join the Arizona Rattlers who, a few weeks earlier, won their Arena Football League championship against the Cleveland Gladiators.

Earlier this month, government, business, and civic leaders hosted representatives from the Democratic National Committee in town to evaluate Phoenix as the site of the 2016 Democratic National Convention. Phoenix was the fifth and final stop for convention planners. Other cities being considered are Birmingham, AL; Columbus, OH; New York City; and Philadelphia, PA. According to Mayor Stanton, “I am confident that when the DNC leadership leaves here, they will leave with an understanding that, logistically, there is no better place than Phoenix.”

Downtown Phoenix welcomes a new brewery. On September 15, Mother Bunch Brewing opened in the 1926 J.B. Bayless Grocery building at Seventh Street and Garfield. Until it offers its own signature beers in a few weeks, Mother Bunch will make available a variety of Arizona beers through its 20 taps along with a “sophisticated, but not complicated” lunch and dinner menu.

Local First Arizona has released the fifth edition of its Phoenix Small Wonders map, a pocket-sized guide featuring nearly sixty local restaurants, pubs, galleries, boutiques, venues, and experiences located in central Phoenix. All of the businesses included in the guide are independently owned and operated.

The City of Phoenix received a $1.6 million grant from the U.S. Department of Transportation to evaluate the planning, environmental, and conceptual engineering to extend Metro light rail down Central Avenue from Jefferson to Baseline Road. According to Mayor Greg Stanton, “Getting light rail to South Mountain is one of my personal priorities. I want to bring the same flexible transit options to the area as others in the city experience with Metro.”

The City of Phoenix has selected Chicago-based Smithfield Properties to develop a mixed-used project on the northwest corner of Central Avenue and Van Buren, the current site of the Central Station transit facility. Smithfield proposes a 476-apartment, 390-foot building that would be one of the tallest buildings in Arizona. A parking garage also would be built as part of the new development. Metro light rail trains and Valley Metro buses still will run through the station.

New City Church will be moving into a 18,000 square foot building at 1300 North Central Avenue for more space and a central location near the Roosevelt Row Arts District. According to Pastor Brian Kruckenberg, “We love being on the ‘front porch’ of the city and are ecstatic about the growth and attention that the city’s center is getting.”

New apartments and condominiums have sprung up or are being planned in and around downtown Phoenix. That’s a positive trend. But stalwarts of downtown living are the residents of Phoenix’s historic districts who remained while others fled to the suburbs in the 50s or purchased, renovated, and brought back to life vintage homes since then. The Arizona Republic has begun to profile these neighborhoods in word and photo: Country Club Park, Del Norte Place, East Evergreen, Encanto Palmcroft, F.Q. Story, Fairview Place, La Hacienda, Margarita Place, North Encanto, North Garfield, Roosevelt, Windsor Square, Woodland, and Woodlea.

The second RadiatePHX business and community networking event, sponsored by DPI and Downtown Phoenix Journal, was held at the ASU Step Gallery in the Warehouse District on Tuesday. The theme and conversation focused on the importance of the arts community, cultural engagement, and the work of our local creatives to help transform and improve our downtown. Guest speakers in front of a packed audience included Councilwoman Kate Gallego and Steven Tepper, the new Dean of the ASU Herberger Institute of Design and the Arts. We appreciated the strong participation of PCA members at this event.

Arizona State University’s Walter Cronkite School of Journalism and Mass Communication in downtown Phoenix is opening the doors of its New Media Innovation Lab to the public, offering expert advice and support on entrepreneurial and technological endeavors.

Two members of the DPI Board of Directors were just highlighted in the press, partly due to their involvement with the arts: Ken Van Winkle, managing partner with Lewis, Roca, Rothgerber, most recently chaired Ballet Arizona’s successful campaign to create their new facility at 29th Street and Washington. Tim Eigo, editor of Arizona Attorney magazine, serves as steering committee chair of Downtown Voices Coalition and recent host of Space 55’s first PHIL Talk (Phoenix Has Ideas LIVE), a comical parody of TED Talks. In addition, Dr. Carol Poore, chair of PCA’s Arts, Culture, and Public Life Committee, wrote a compelling op-ed in the Arizona Republic about how science, technology, engineering, math, and the arts are all vital to attracting businesses and retaining skilled workers in cities and towns throughout our state.

Amanda LaCasse, one of the 106,800 college students who live in Phoenix – and more specifically downtown Phoenix – shared her opinion about growing up and now furthering her education here: “The gems I have grown to love are not hidden – they are plain and simple, out in the open. Anyone can find a spot to feel at home in downtown Phoenix if they spend enough time getting to know the area, and nobody should be afraid of it. It offers the same services as any other part of the city, but with a more authentic attitude and honest, personable interactions with people who love you for who you are.”