Discover the Irish Cultural Center with ‘The Dead’ 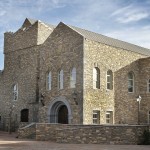 It may look a little imposing from the outside, but the Irish Cultural Center and the adjoining McClelland Library offer an astonishing gamut of Irish events and educational opportunities for anyone who wants to know a little more about the rich history and culture of the Emerald Isle. At first glance, you may ask yourself “An Irish cultural center, in Arizona?,” but a surprising number of Irish immigrants and transplants have made their way to Arizona in the last 150 years, and this unique complex is an important cultural resource for anyone who wants to better understand their real or imagined Irish roots. Fashioned after authentic Irish buildings and built with some traditional materials, like the blue limestone that was brought to the site from County Galway, the Center transports visitors to another time and place. Situated on the southeast corner of Hance Park and Central Ave, the Irish Cultural Center was created out of a unique public/private partnership among the City of Phoenix Parks and Recreation Department; ADOT; a Sister City relationship with Ennis, Ireland; and the nonprofit Irish Cultural and Learning Foundation. The foundation raised the initial $100,000 to plan for the center, and the project received bond money to construct the initial elements of the site: An Gorta Mór Hunger Memorial (dedicated in 1999); An Halla Mór, aka The Great Hall (dedicated on St. Patrick’s Day in 2002); and the Irish 1850’s Cottage (dedicated in 2004). The most recent addition to the complex, the McClelland Library, is a three story building resembling a traditional 12th century Norman castle, which was fully-funded by Norman McClelland of the Arizona-based, family-owned Shamrock Farms. “While the Center as whole embraces many aspects of Irish life and culture,” said Chas Moore, the head librarian for the McClelland (pictured right), “the library gives us an opportunity to showcase Ireland’s rich art and literary traditions, as well as provide genealogy resources for people interested in tracing their own Irish backgrounds.”

Now is a perfect time to visit both the Center and the McClelland library, as they launch a month and a half of special programming to celebrate the 100-year anniversary of the publication of James Joyce’s The Dubliners.

Joyce wrote the groundbreaking collection of short stories in 1905 and spent nearly ten years struggling to get it published because of controversial elements in the stories. After Irish publishers repeatedly refused the collection, it was finally published in London in 1914. The celebration features events from September 24 through November 8.

Celebrate the 100-Year Anniversary of the Publication of The Dubliners

Saturday, November 8, 10:30 a.m. – 12:30 p.m.: Discussion of the final story in the collection, “The Dead” and a screening of the film directed by John Huston and starring his daughter, Angelica Huston.

If you haven’t yet crossed the threshold of the Irish Cultural Center and the McClelland Library, don’t hesitate. In addition to the wonderful buildings, the rich resources, and the regular events and celebrations held there, this hidden gem hosts an array of ongoing Irish language, dancing and music classes available to everyone.