Wire | Connect to the Core with RadiatePHX 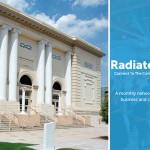 Join Downtown Phoenix business leaders, community advocates, and city officials at the launch of this free monthly networking series. Each month RadiatePHX will connect you to the people, projects, issues, and solutions that are building the Downtown we want.

Hosted by Downtown Phoenix, Inc. and Downtown Phoenix Journal, RadiatePHX provides a monthly opportunity to connect with a broad spectrum of Downtown advocates, receive key updates from guest speakers on what’s happening in the city core, and learn how you can connect and contribute.

On tap for August is David Krietor, CEO of Downtown Phoenix, Inc., with updates on Downtown developments, and Terry Madeksza, Vice President of Operations for Downtown Phoenix Partnership, on plans for Super Bowl Central.

Each month, RadiatePHX will invite you to “connect to the core:” meet fellow business people, community and civic leaders, and urban advocates for a friendly, informative networking event that will keep you in the know about every opportunity in Downtown.

What: RadiatePHX, a monthly networking event for business, community, and city leaders

Cost: FREE, with complimentary bites and bar from Downtown eateries Featured image and map courtesy of University of Arizona College of Medicine-Phoenix.