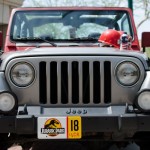 From behind-the-scenes stories of Jurassic Park, to nostalgic jabs at The Land Before Time, Arizona’s original dinosaur fan convention Phoenix DinoCon devours movie and TV dinosaurs from 3 p.m. – 9 p.m. on Saturday, August 2 at the Phoenix Center for the Arts. Nationally unique within the fan event landscape in subject and scope, this 2nd annual dinosaur and kaiju party is suitable for ages 12 and above, but geared toward adults with an everlasting love for dinos. Phoenix DinoCon gives fans a chance to interact with pop culture experts, learn reptilian crafts, purchase locally-produced dinosaur art and even vote a legendary pop culture icon into the Bookmans and Phoenix DinoCon Hall of Distinguished Dinosaurs.

New this year to Phoenix DinoCon is the Diplodocus Demo Den, where fans gain hands-on drawing and crafting experiences like a special make-and-take opportunity: DIY mini-notebooks featuring the hunks of the “Jurassic Park” franchise, depicted in Tiger Beat likenesses. A Velociraptor Vendor Hall roars through the day with dinosaur-inspired local artists, crafters and business owners. Returning this year are Jon Garza and Damien Hernandez, who make dream dinosaur scenarios a reality on location with pencil and watercolor (think Ron Swansonasaurus or your pet Chihuahuas as dueling sauropods.)

Admission is $5 at phxdinocon.brownpapertickets.com or at the door on August 2 upon availability. After-party tickets to a screening of the ’90s B movie Adventures in Dinosaur City are available for $9 at thefilmbarphx.com/event/619291-adventures-in-dinosaur-city-phoenix.

In this story: FilmBar, Jurassic Park, Phoenix Center for the Arts, Phoenix DinoCon