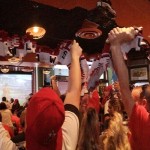 World Cup fever has been everywhere, with numerous restaurants, pubs, and theater in downtown Phoenix welcoming soccer fans as they gather to cheer on their favorite team. #dtphxworldcup #gooooooal

On to Round II

City Manager Ed Zuercher announced that Mark Hartman, the sustainability and green building manager for Vancouver, B.C., will join his leadership team as chief sustainability officer. Acting Parks & Recreation Director Jim Burke can now remove “Acting” from his business cards upon his appointment to director. And John Trujillo was appointed public works director upon the retirement of Neil Mann on July 15.

Downtown’s evolution as the most vibrant, interesting, and diverse community in the region was enhanced with the Phoenix City Council endorsement of the Downtown Transportation Plan. The plan will make downtown more walkable, bikeable, and transit and business friendly. A special thank you to the Phoenix Suns, Councilwoman Kate Gallego, Deputy City Manager Rick Naimark, and Ray Dovalina and Mark Melnychenko from the Street Transportation Department for their commitment to this effort. This is a really big deal that will positively change the face of downtown.

The City of Phoenix’s adaptive reuse program is highlighted in this recent Arizona Republic online slide show. Since the program’s establishment in 2008, over 100 buildings, many of them vintage and historic in and around downtown Phoenix, have been rejuvenated for new business uses. Thank you to DPI Board member Kimber Lanning for being such a strong advocate.

Downtown Phoenix is all about collaboration and creative energy and nowhere is that more evident than the new DTPHX Engagement Lab at Arizona Center. DPI’s new storefront space activation, located at 455 N. 3rd St., #1210 (north adjacent to Starbucks), is hard to miss with its bright colored chairs, craft paper, stencils, and Downtowners hard at work building the city they want. Open to the public Monday through Friday from 10 a.m. to 4 p.m., DTPHX Engagement Lab is a partnership between DPI and Arizona Center designed to connect a wide variety of city users – residents, employees, tourists, conventioneers, and students – to the downtown experience. From art and co-working to community building and idea-sharing, DTPHX Engagement Lab will be an important tool to help shape the Next Phoenix. Arizona PBS, the 53-year-old public television station with more than 1 million viewers, will become part of the Walter Cronkite School of Journalism and Mass Communication in early July. Eight, which includes three TV channels and azpbs.org, will be the largest media organization operated by a journalism school in the world. Also on the downtown Phoenix campus, groundbreaking for the Arizona Center for Law and Society is scheduled for July 7, with plans for completion in the summer of 2016. The first semester of classes in the new facility are scheduled for autumn 2016.

Congratulations to Roosevelt Row CDC for receiving one of 55 ArtPlace America grants in the amount of $90,000 to support a creative placemaking shipping container pilot project to help address the ongoing need for affordable housing for artists who want to live and work in downtown Phoenix. This is the second year in a row that Roosevelt Row has received a grant from ArtPlace. In 1988 the Phoenix Community Alliance helped to “birth” Artlink Inc., our downtown Phoenix non-profit group dedicated to linking artists, business, and the public to support a thriving arts community. At the June 30th Artlink annual meeting in front of a packed house at the Phoenix Art Museum, Mayor Greg Stanton, Museum Director Jim Ballinger, and I spoke about the importance of the arts in aiding downtown’s revitalization. Board members of Artlink, chaired by Catrina Kahler, outlined an aggressive and positive set of initiatives and events calendar to move Artlink and the arts forward. The Maricopa Association of Governments is urging metro Phoenix residents to take their online survey on bikes, canals, and wayfinding. Click here to complete the survey. Deadline is July 31, 2014.

On June 18, the Phoenix City Council approved an ordinance to move to a demand model for managing our parking meters with a new maximum hourly rate of $4 and extended hours where meter turnover is desired. One week later, Council voted 8-1 to adopt a “complete streets” ordinance and unanimously approved the Downtown Phoenix Comprehensive Transportation Study.

In uptown Phoenix, congratulations to Venue Partners, Changing Hands bookstore, and Southern Rail restaurant for the opening of The Newton in the former Beefeaters restaurant at Camelback and 3rd Avenue. DPI Board member Cindy Dach has been a big part of this project. In midtown Phoenix, congratulations to Lisa Sette for the opening of Lisa Sette Gallery in a building designed by noted local architect, Al Beadle.

The Arizona Super Bowl Host Committee has announced its community campaign for Super Bowl XLIX in partnership with the National Football League (NFL) Foundation to distribute more than $2 million to Arizona nonprofits leading up to the February 1, 2015 game. With the launch of the “In the Community” web page, local nonprofits are encouraged to visit the site to learn about the Host Committee’s giving mission and focus areas. The legacy grants will focus on distributing dollars to local nonprofits that submit proposals with a key focus in education and youth health and wellness programs. The application will be available online until July 11, 2014.

PHX in the White House

Earlier this month at a White House summit of more than 80 local officials, Phoenix Mayor Greg Stanton was thanked by First Lady Michelle Obama for his leadership to end chronic veteran homelessness in Phoenix. The gathering was part of the Mayors Challenge to End Veteran Homelessness, an initiative that encourages the same Housing First model used in Phoenix.