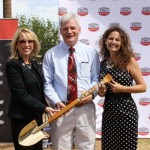 With the launch of the “In the Community” web page, www.azsuperbowl.com/community, local nonprofits are encouraged to visit the site to learn about the Host Committee’s giving mission and focus areas. The legacy grants will focus on distributing dollars to local nonprofits that submit proposals with a key focus in education and youth health and wellness programs. The application will be available online June 23 until July 11.

The NFL Foundation annually donates $1 million towards Super Bowl legacy programs and is matched by local private and public donations.

“Giving back to the local nonprofit community is a tremendous opportunity that will allow us to leave Arizona in a better place as a result of Super Bowl XLIX. We appreciate the local business leaders and corporations support to make this investment possible and look forward to the many legacy projects that will be funded leading up to the Big Game,” said David Rousseau, Chairman, Arizona Super Bowl Host Committee. The “In the Community” web page also features current community outreach events that the Host Committee has participated in throughout Arizona ranging from tree planting events to literacy fairs and football clinics. In addition, there is a donation page for the public to join the movement to leave a lasting legacy in Arizona by donating online and becoming an active philanthropist.