Wire | Monday is Military Appreciation Day for the D-backs 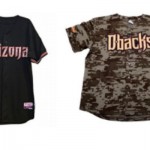 The Arizona Diamondbacks (@Dbacks) will honor all military active duty, reserve, retired and veterans and will pay tribute to fallen military heroes this Monday as the D-backs host Military Appreciation Day on Memorial Day at Chase Field. The D-backs will hand out 15,000 D-backs camouflage replica jerseys, courtesy of Budweiser, to fans 21 and over. The D-backs will honor and recognize several military service members and organizations on Monday, including:

The D-backs will wear black jerseys with camouflaged “Arizona” lettering and will sport an authentic military digital camouflage designed cap in honor of Memorial Day. The game-worn, autographed jerseys will be auctioned off beginning at 5:00PM on Memorial Day online at www.dbacks.com/auctions. The online auction will end on June 3 and proceeds will benefit military charities through the Arizona Diamondbacks Foundation. The specially-designed camouflage hat and jersey with camouflaged “Arizona” lettering will be available for purchase in the Team Shop.

The D-backs’ military ticket offer for 50-percent off ticket prices is available to all military active duty, reserve, retired and veterans, as well as active and retired fire and police personnel with a valid ID. The offer is available at the Chase Field Box Office, by calling 602.514.8400 or online at www.dbacks.com/military.