Wire | To the Deserts of Ancient Egypt 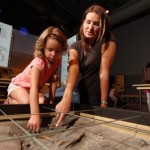 Ancient Egyptian artifacts will be on view in Phoenix when Lost Egypt: Ancient Secrets, Modern Science opens at Arizona Science Center on May 31. Lost Egypt is an immersive quest for knowledge that reveals how archaeologists use modern science and technology to uncover and understand the ancient civilization of Egypt. Through hands-on challenges, authentic artifacts and guidance from real archaeologists, visitors will unearth the mysteries of Egypt, its culture and its people. The exhibition explores how mummies, artifacts and other material remains contribute to our scientific understanding of past cultures.

“From the pyramids to body preservation, there is a mystique and fascination with ancient Egypt that is unlike any other historic culture,” said Chevy Humphrey, President and CEO of Arizona Science Center. “Visitors will be intrigued by the artifacts and the ways modern scientific advancements are uncovering new information about this era every day.”

Highlights include a real human mummy and several animal mummies, as well as scans, forensic facial reconstructions and for the first time ever, a life-size rapid prototype (a type of 3D computer model) of a mummy in a stage of “unwrapping.” Visitors will also be transported into ancient times where they will discover a re-creation of an Egyptian tomb and authentic art and artifacts from the daily life and funerary culture of ancient Egypt.

Some of the worlds’ foremost authorities on Egypt are featured in the exhibition. Visitors will be able to connect with them through video interviews and photographs from the field.

“Lost Egypt makes an unforgettable connection between past and present customs, cultures and sciences,” added Humphrey. “This exhibit is particularly inspiring for young people, illuminating the roles they can play as future archaeologists, scientists, engineers, technicians and life-long learners.” Lost Egypt is divided into four content areas:
1. Orientation Entrance, features a modern Egyptian street scene that transports visitors to Egypt where they learn about some of the archeologists working in Egypt today.
2. Field Site, where visitors explore the tools, techniques, science and technologies used at the Lost City of the Pyramid Builders on the Giza Plateau.
3. In Ancient Egyptian Culture, visitors see a human mummy, funerary artifacts and exhibits about the art and language of ancient Egypt.
4. In the Laboratory, visitors discover animal mummies, X-rays and CT scans of human and animal mummies, facial reconstructions and rapid prototypes of ancient Egyptians.