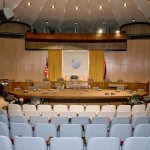 The City Manager’s Trial Budget was formally presented on March 25, 2014 and is currently being discussed at more than 20 community budget hearings Citywide. For Council Districts 4 & 7, the community hearing will be held at Singer Hall in the Phoenix Art Museum, tomorrow night at 6 pm.

Residents are invited to attend community budget hearings to discuss the proposed City Manager’s 2014-15 Trial Budget and provide input and ideas. Council members and staff will answer questions and talk about specific district issues. To view a copy of the City Council Report on this topic, please visit phoenix.gov/budget. Questions and comments on the proposed budget can be sent to budget.research@phoenix.gov or by calling 602-262-4800 or TTY Relay 602-534-5500.

With regards to the budget, state law requires a 60-day posting period on the City’s website for notice of intent to add new fees or taxes or to increase existing fees or taxes. This is to allow the public ample time to comment on proposals. Given the timeline to approve the budget before the next fiscal year begins, a 60-day posting beginning on April 17 would allow the City Council to act by June 18, the final meeting of the fiscal year. Therefore, the City Council is being asked to authorize posting revenue ideas in order to give the City Council the ability to act on June 18.

One revenue idea of particular note is an increase to parking meter rates from the current rate of $1.50 per hour to a range of $0.50 per hour up to $6 per hour. This idea would allow for use of the City’s new meters to charge variable rates that coincide with changes in demand due to time of day, location, and special events. Combined with expansion of parking meter enforcement hours to be determined by City Council, these changes would result in approximately $1 million – $2 million additional General Fund revenue annually, and would be offset somewhat by costs for additional enforcement needs.