Next Steps for Hance Park 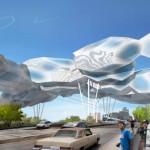 Central Park. Hyde Park. Griffith Park. Millennium Park. All famous spots that have become integral to the cities they exist within. So what’s the defining park of Phoenix?

If you’re still searching for an answer, you’re not alone. But thanks to the efforts of what started as a small group of downtown citizens and has bloomed into the Hance Park Conservancy, the answer to that question may very soon be Margaret T. Hance Park.

The City of Phoenix Parks and Recreation Department, in collaboration with the Hance Park Conservancy, put out a call to professional design teams to submit their best ideas for a completely remodeled downtown park.

On Thursday, March 27, the master plans were revealed to an excited crowd at the park, just south of Burton Barr Central Library. Playing on a city that is large, sprawling, and interspersed into the natural geography, the proposed master plan for Hance Park will answer the vastness of Phoenix with its own buttes, ridges, and sprawling valleys.

The three zones of Hance Park.

Not to mention a beer garden, dog park, zip line, dedicated performance pavilion, a skate park, and a built-in irrigation system to support vegetation, among other new amenities. The proposed plan should reach completion in 10 years, at a budget of $118 million.

In order to keep the excitement and momentum set forth by the unveiling of the park’s plans, Weddle stressed the need to focus on the first set of changes coming to the space.

“We really need to focus on that catalytic first phase,” he said. “We believe that the most significant thing we can do is focus the early money on creating a signature gateway into the park at Central Avenue. That’s creating a vibrant urban plaza and the cloud that becomes the signature marker for this park.”

The cloud referred to is a collection of structures to be installed over Central Avenue marking the entrance to the park, and most resemble a small fleet of miniature alien space crafts, slowly descending upon the city. Somewhat surprisingly, that $118 million price tag is reasonable when compared with parks of similar prominence throughout the United States. The cost breaks down to $3.7 million per acre, comparable to the Brooklyn Bridge Park in New York, which came in at $3.2 million per acre. Even Phoenix’s Civic Space Park, although smaller, came in slightly higher at $5.2 million per acre.

As Weddle described, the master plan is a long-term vision that will be funded through mixed initiatives.

“We are proposing to fund it through a public-private partnership. It’s really the model that shows the community is invested in the park as much as the public entity is. It’s a smart investment; it creates economic benefits for our community.”

Kimber Lanning, founder and executive director of Local First Arizona, reminded attendees of the unveiling event that the price tag is not as intimidating as it seems.

“We have invested between $4 and $5 billion dollars in this downtown, and we need to have this park finished,” she said.

“You know, Chicago didn’t just wake up one day as a great city; it was built by the people just like you who lived in Chicago. I’m not saying this is going to be easy. There’s going to be people who tell us we can’t afford this. I argue we can’t afford not to do this.”

According to Weddle, the next areas of focus will be working with the city and Hance Park Conservancy to expand programming within the park as it is today, because, as he says, “I think it’s really important to try and build the vibrancy as quickly as possible and not necessarily wait for construction.”

Building the vibrancy would include both larger events, such as concerts and festivals, and smaller, day to day activities, such as yoga in the park.

The team is also working to map out funding strategies going forward, as there is no dedicated funding for construction at the moment, according to Weddle.

In addition to the first phase renovations to the plaza and clouds over Central Ave, the team is planning on making improvements to the performance pavilion a top priority, as it allows for new programming and partnerships with art and cultural organizations downtown.