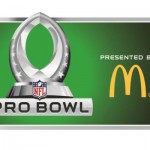 “This is a unique opportunity and it gives us added focus as we work with the Arizona Super Bowl Host Committee, the City of Phoenix and downtown stakeholders in the development of Super Bowl Central. There is an exciting potential for synergy with downtown Super Bowl activities, and we look forward to working on it.” – David Krietor, CEO of Downtown Phoenix Inc. The National Football League announced today locations and dates for the next two Pro Bowls.

The Pro Bowl following the 2014 season will be played on Sunday, January 25, 2015 and televised live on ESPN at 8 PM ET from University of Phoenix Stadium in Arizona, the site of Super Bowl XLIX a week later on Sunday, February 1. The Arizona Cardinals and Arizona Super Bowl Host Committee will host the Pro Bowl and surrounding activities.

The Pro Bowl following the 2015 season will be played on Sunday, January 31, 2016 and televised live on ESPN from Aloha Stadium in Hawaii, which first hosted the NFL’s All-Star game in 1980. San Francisco will host Super Bowl L the following Sunday.

The NFL has an agreement with the State of Hawaii to play the Pro Bowl at Aloha Stadium following the 2016 season but final confirmation of the game will be made at a later date.

Watched by 11.4 million viewers in 2014, the Pro Bowl, presented by McDonald’s, has been the most-watched all-star game in all of sports the past four years.

The 2015 Pro Bowl will be the sixth consecutive game played prior to the Super Bowl.

The 2014 Pro Bowl featured a significantly revised format that will continue. For the first time, the Pro Bowl was “unconferenced,” and several key playing rules were changed. Rather than the familiar AFC vs. NFC match-up that had existed since 1971, players were selected without regard to conference in voting by fans, coaches and players.