Get Into the Groove on Grand 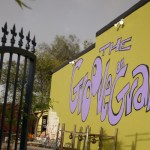 The Grand Avenue Arts District is a neighborhood on the rise. Set along the lower section of Grand Avenue in downtown Phoenix, it is a place where arts and community converge.

Recent improvements resulting from the EPA’s Greening America’s Capitals grant have left Grand Avenue a more beautiful pedestrian and bike-friendly place. The district is home to a range of businesses, including art galleries and studios, offices, restaurants and bars. It is also a major hub of activity for Artlink’s First and Third Friday Art Walks. Part of this activity and growth can be attributed to the efforts of property owners like Tom and Laurie Carmody. The couple have championed real estate and redevelopment projects in multiple districts throughout downtown Phoenix, including in Roosevelt Row, Grand Avenue and the Midtown District. Currently, the Carmodys’ energy is focused on Grand Avenue, with a project called The Groove on Grand, located at 1028 NW Grand Ave., in the former location of The Paisley Violin.

No strangers to the neighborhood, they were part of the force behind the development of the Oasis on Grand, a vintage motor lodge transformed into an arts-focused residential community.

With The Groove, they hope to create a gathering place for people in the neighborhood and beyond. “We’re very engaged in the revitalization of the arts district on Grand, and we think that this can be a part of that— a place where the community could come together and meet, with food and wine, and where artists can participate,” says Laurie Carmody.

The layout of The Groove on Grand forms its own little neighborhood, with its main building facing the street, and a cluster of historic cottages situated around an expansive tree-shaded patio in the back. The collection of brightly-colored cottages was once part of the World War II POW camps at Papago Park before they were salvaged and relocated by the Carmodys. In their new life, they house a variety of small businesses and studio spaces.

One of these is the Red House Pub, living up to its name with a small bar in a bright red cottage. The Red House serves beer and wine Tuesday through Saturdays, with different musicians and DJs every night.

On First and Third Fridays, The Groove hosts live music, food trucks and displays different featured artists throughout its buildings.

With the arts as the linchpin for Grand Avenue, The Groove is focused on supporting the artists who work and live in the neighborhood. “The more artists we have that are thriving, then the street thrives,” says Laurie.

The Carmodys see a bright future for the Grand Avenue Arts District.

“It’s a dynamic place. It has a lot of energy and people like to be involved in it, to be around it. And I think it’s creating a nice atmosphere to promote collaboration and communication between the neighbors and the street and the community.”