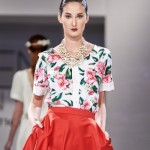 For spring 2014, Phoenix Fashion Week is making a downtown debut. Spring Into Fashion is one of the organization’s regular quarterly events, used to “build momentum” in anticipation of October’s fashion week, which will celebrate its 10th anniversary this year, according to Executive Director Brian Hill.

Spurred by conversations with Mayor Stanton earlier this winter, Hill and his team “shared the vision of fashion week, what we’ve accomplished, our feature in Time magazine last fall, and how we’re putting Phoenix fashion on the map. The mayor communicated that he’d like to get us more involved with downtown events,” the first of which is this spring trend report at Arizona Center on Friday, March 28. Friday’s runway show is a first not only for Phoenix Fashion Week, but also for the Arizona Center. Hill believes that “to find that location is a gem. No one has ever done a fashion show in this space before, and I think a lot of people are going to want to after this. The greenscape, the length of the runway, it’s really unique.”

Over 300 attendees will be treated to both men’s and women’s spring fashions.

“From a male standpoint, the trend is ‘men are getting dressed up.’ It is definitely the season of the gentleman,” says Hill.

Other featured trends are denim; black and white pairings; skinny pleats, seen in long, flowing skirts; pink in all its various shades; and mixing but not matching—change up the colors of your accessories, contrast them for an eye-catching pop.

While Spring Into Fashion is moving into the heart of Phoenix’s business district, don’t expect pantsuits and pumps. For Hill, downtown fashion is an amalgam of styles. “It’s upscale, it’s street chic, it’s urban, it’s all those kind of rolled into one. On any given day, you’ll see someone dressed completely preppy, dressed couture, you’ll see someone dressed in a national retailer like Michael Kors. You’ll see the whole spectrum downtown.”

Noting that both the Arizona Center and CityScape cater to “traditional retailers,” Hill says that “coupled with national retailers downtown, you have more of an independent or indie designer feel based downtown.”

But that is not to say that the fashion elite is turning its back on the core population who walks these downtown streets on a daily basis.

“Downtown-based students to downtown-based business people are going to come out and realize I can walk right from my office to this event downtown. We’re excited about attracting the business district here.”