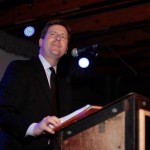 And with what follows, I’m in sharing mode: Mayor Greg Stanton highlighted downtown’s gains and challenges in his “Celebrate Downtown” address presented at Artlink’s Art d’Core Gala on March 1 at Crescent Ballroom. To a packed (and slightly rained upon) house, the mayor marked the collaborative contributions of businesses, entrepreneurs, artists, and his own agenda to rebuild neighborhood identity, culture, and business.

Downtown Stands Up Against SB1062

The Suns Make a Playoff Run There is something special happening at US Airways Center. The Phoenix Suns, who everyone believed were headed into a rebuilding year, are fighting for a spot in the NBA playoffs. Click here for ticket information for remaining home games.

The Downtown Phoenix Podcast launched as a unique collaboration among downtown activists, stakeholders, news organizations, and neighborhood groups. The podcast’s host and managing editor, Edward Jensen, asked me to serve as the first guest (aka “the guinea pig”) to talk about Downtown Phoenix, Inc., past, present, and future.