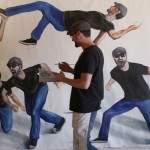 Don’t miss the once-a-year opportunity to peer into the studios of working artists and wander through galleries during Artlink’s Art Detour 26 this weekend. Along with the top art venues of downtown Phoenix and countless pop-up exhibits, dozens of painters, sculptors, photographers, glassblowers, and other creative minds open the doors of their private space to curious visitors.

With the event map in hand, art lovers can explore more than 100 stops on a two-day self-guided tour, many within convenient walking distance of the free Art Detour shuttle route. Docents ride along on two London-style double-decker buses circulating continuously at 20-minute intervals between 11 a.m. and 5 p.m. on Saturday and Sunday, while four information hubs at Phoenix Art Museum, Oasis on Grand, CityScape, and the Arizona Center provide volunteers ready to answer questions.

The adventure begins this evening with a greater-than-usual array of First Friday opportunities, including an open rehearsal by the Phoenix Chorale at Trinity Cathedral. While you’re there, check out Olney Gallery’s Color Color Color! exhibition, featuring work by Kaori Takamura, Sarah Kriehn, and Christopher Jagmin.

Elsewhere, the weekend is filled with live music — along with a multitude of casual performances like Bones of Folk’s Danyul Kostin at Oasis on Grand and the Moonlight Howlers at The Lost Leaf, tonight’s ambitious Viva Phx festival brings 70 groups — including Sir Mix-A-Lot, The Neighbourhood, Black Carl, Tobie Milford, and Pinback — to 14 venues ranging from Crescent Ballroom to the Hotel San Carlos to the Arizona Latino Arts and Cultural Center. The next day, Phoenix Blues Society’s Blues Blast ’14 fills Saturday with tunes from Hans Olson, Leon J’s JukeJoint, the Mike Eldred Trio, and other Rhythm Room stars at Margaret T. Hance Park — show an Art Detour map for a ticket discount. Detour to 731 NW Grand Ave. Pete Deise is the featured artist in a spectacular Artlink Pop-up Gallery in the historic O.S. Stapley Building.

Once your ears are satiated, fill your eyes with images from Artlink board member Hugo Medina, curator of the Phoenix Phabulous History Mural showing at Walter Studios. “I think it’s important that artists keep creating, pulling forward, which I try to do with my own work as well,” he says. “Phoenix is a phenomenal destination…. We’ve just got to start getting the collectors to start coming out, and that’s the challenge.”

For the month of March, R. Pela Contemporary Art will display Banned at the Herberger, including part of a controversial canceled show originally scheduled last fall at the Herberger Theater Center Art Gallery. The exhibit includes work by Mike Ford, Ronnie Ray Mendez, and Lisa Albinger. “Mike Ford’s photographs, about his relationship with his mother who has Alzheimer’s disease, have such depth,” says curator Robrt Pela. “There’s sadness, and camp, and real emotion. I had to share them.”

He continues, “I think that the art that I’m showing…I want there to be craftsmanship and beauty, but there has to be another element too…some commentary, some politics, some pain. It can’t just be something that’s lovely to look at because that isn’t quite enough.”

All weekend, kids can find plenty of fun with finger-paint murals, demonstrations, workshops, and other family-friendly activities at Kids’ Detour, various galleries and studios, and the Blues Blast. Retailers and restaurateurs also add to the experience with extended weekend hours and specials.