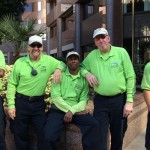 The last time you came Downtown you missed something. To be precise, 1,504 somethings: That’s the number of graffiti tags removed from buildings, signs and public spaces by the Downtown PhoenixStreetscape Team in 2013. It’s all part of the job for the five member team that keeps Downtown Phoenix clean and inviting. On duty 365 days a year, Streetscape Team also removes trash from streets and sidewalks, cleans alleys and empties sidewalk trash receptacles.

2013 was a big year for the Field Services Team with nearly 155,500 visitors, conventioneers and Downtowners assisted by Ambassadors and Streetscape Team Members. Other notable highlights include:

But the Field Services Team is more than just statistics, Madeksza said.

“Our 27 full-time employees are highly trained and they’re enthusiastic to create meaningful experiences for everyone who comes Downtown, whether they’re residents, business owners, employees, visitors or students,” Madeksza said. “Everyone knows and loves the members of our Field Services Team.”