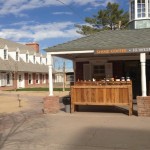 When it comes to operating a coffee shop in Phoenix, Christiaan and Laryn Callaway-Blok, the owners of Shine Coffee, are creating a very special midtown caffeine community.

When the recession wreaked havoc on their previous careers, the Bloks had to think fast about how they would make a living. According to Laryn, the proliferation of coffee shops along Central Avenue signaled positive growth for Phoenix, and the opportunity for the couple to invest in their home.

“It’s a sign of a lot of urban renewal, it’s a sign of people moving to downtown,” she said of the multiplicity of businesses moving downtown. “We had to do something,” said Christiaan. “So it’s kind of the quintessential American story of how people reinvent themselves.”

Christiaan was born in the Netherlands and lived in Europe for the first 20 years of his life, where he experienced a coffee culture different than the more automatic, mechanized one in the United States.

“I create relationships, and people love that,” said Christiaan. “People tell their stories, and people tell me if they’re joyous or sad. And that is actually very much an element of the European café culture.”

Their current Vernon Avenue brick and mortar location opened in November 2012, and was an outgrowth of their experience running a mobile business.

“We started as a food truck, and we really saw a niche for kind of an upscale, mobile coffee bar, which is what we did for a couple of years,” according to Laryn. “The food truck situation is wonderful, but it’s far more manual labor than a regular restaurant.”

Once they established the physical location for Shine, the Bloks took some initiative with their surroundings. Most recently, they completed a $23,000 privately-funded Kickstarter campaign, transforming the vacant space outside the shop into a community gathering spot to benefit both the community and the economy. The Vernon Avenue Pocket Park officially opened to the public on January 18th.

Because Shine is located in an active, midtown, urban community, the park fit right into place.

When it was time to layout a design for the park, the Bloks approached Kirby Hoyt, landscape designer at Edge Industries, who wanted to utilize the outdoor space to encourage community involvement.

“I hope this is a catalyst for other things like this to take place,” said Hoyt. “As a city, we don’t have to wait for the government to come in and do things; we can do things on our own.”

“As we were working on the design, they [the Bloks] took over the front part of the adjacent building for their living room, and then we tweaked the design,” said Hoyt. “We probably just rotated it 90 degrees basically to fill out this area that now is in the front of the building. So now it ties to two spaces together.”

Although there have already been drastic improvements for the business, the customers, and the city, the Bloks will continue to enhance customer experience.

For now, they want to focus on expanding the menu and park amenities at this location. Although the couple wants to share coffee culture with as many people possible, they do not rely heavily on advertising and social media, instead preferring word of mouth.

“I think that advertising for a coffee shop can be detrimental,” said Christiaan. “If it’s good, people are going to come anyways.”

Ultimately, Shine Coffee will continue to evolve in order to create a unique customer experience that also maintains the needs of both the business and Phoenix sustainability.

“We think it’s a good time to be exploring the different kinds of coffee bars that can exist in the city of Phoenix,” Laryn said.