Wire | Suns and Rattlers Partner Up 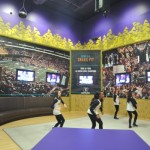 The Phoenix Suns are proud to announce a marketing partnership with the Arena Football League’s (AFL) Arizona Rattlers. The new agreement is one of a limited number of partnerships between a professional sports franchise and an AFL team. The two teams already share a unique relationship as the Rattlers were owned by the Suns organization from its inception in 1992 until 2005. Since separating, the two teams have continued to share US Airways Center as their home playing venue. Now nine years later, the teams have joined forces once again.

“We are thrilled to partner with the Phoenix Suns organization,” said Rattlers majority owner Ron Shurts. “It is an honor to support the longest-running professional sports franchise in the Valley and it is only natural that our two organizations come together again. We look forward to uniting our fans and connecting with the community in a new and exciting way.”

“The Suns are excited to be a part of this unique partnership with the four-time Arena Bowl Champion Arizona Rattlers,” said Suns President Jason Rowley. “Between our long-standing relationship and both teams’ dedication to providing fans with exceptional service and entertainment, this partnership is a natural fit.”

Highlighting the partnership is a redesign of the Phoenix Suns Gorilla Greenhouse to include “Gorilla and Friends” where the Rattlers’ mascot Stryker joins the Gorilla and Phoenix Mercury’s Scorch in the play area located in the upper concourse. The Rattlers branding includes an interactive football game to be projected on the floor for children to enjoy during both NBA and AFL games. It also features multiple video screens and a collage of photos showcasing the exciting atmosphere of Rattlers football.

In addition to the Gorilla Greenhouse re-design, Rattlers signage and promotions will air on the video screens during Suns games as well as a monthly Lucky Row contest where fans of one lucky row will win a Rattlers Fan Pack.

Tickets are still available for the Suns matchup against the San Antonio Spurs on Friday, February 21 at US Airways Center. Tip-off is scheduled for 7 p.m. Like the Suns on the court, good seats are going fast! Make sure to get yours today at Suns.com, before they’re gone.