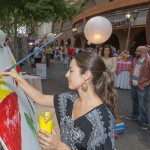 How does a downtown hotel celebrate its second birthday? If it’s the Renaissance Phoenix Downtown Hotel, they mark the occasion with an elaborate block party, replete with an adult hot chocolate bar, lobster corn dogs, Dave Damiani & the No Vacancy Orchestra and a silent auction, with proceeds to benefit the O’Connor House.

A luxurious celebration, for sure, but one that is representative of the relationship the Renaissance has built with the downtown community in only a couple of years. It is the perfect opportunity to, as General Manager Paige Lund says, “share the personality of this great city and the soul of this great city, because there’s a lot of it.”

Having opened its doors in January 2012, the former Wyndham property had undergone a renovation a few years prior, but the Renaissance team has actively transformed the space, updating guest rooms, fitness center and club lounge to create a cohesive space that reflects its downtown environs. A lifestyle brand within the Marriott portfolio, Renaissance partners with each city in which it is located to promote what Lund describes as “the experiential side.”

We asked the Navigators to share some of the gems they suggest to visitors. Here are a few highlights.

Orpheum Theatre (for shows or the Tuesday guided tour)

Walk along Monroe to Heritage Square

The murals along Roosevelt

The homes of FQ Story

Hotel guests are referred to as “Discoverers,” while concierges are “Navigators,” helping to plan their visit. While visitors are known to come to the Valley for the weather, the golfing and other outdoor activities, the navigators introduce Phoenix-centric cultural elements, such as local museums, restaurants, and live music. “The places where a local would go,” according to Lund. The hotel even offers a tour of downtown murals.

“They navigate those that stay with us to all the hidden gems, all the local flavor, the best places to sip, savor, shop and see that you wouldn’t otherwise know about if someone local didn’t tell you.”

The most integral local component that the Renaissance has incorporated into its décor, programming, and overall mission is the local arts scene. The guestrooms are filled with photographs that resulted from a student competition with the Phoenix Union High School District; the chandeliers in the ballroom were made by local artisans; and most recently the hotel added its very own gallery, Shade West.

Located in the west wing of the hotel, the non-profit gallery space is run by Shade Projects, with exhibitions changing every four-to-six weeks. The gallery was a natural progression of the partnership the Renaissance has developed with the downtown arts scene. While Lund does not have a formal arts background, she notes that Lead Navigator Jesse Perry is an artist. Many other staff members are well versed in the arts, while others have earned an arts education through their time working here.

The partnership between Shade Projects and the hotel was cemented during a nearly eight-month video project for the hotel that was directed and photographed by Wayne Rainey. The video deftly portrays the relationship Renaissance strives for—a luxury hotel within the heart of a vibrant downtown.

Of the video, Rainey says, “We wanted to create a sense of place. We wanted to create something that said, ‘Check this out. Here are the people of our neighborhood.’ … It’s authentic marketing. It’s almost a lost art, but it’s so cool, and it’s honest, and it works.”

Event Manager William Stratton sees a successful payoff already in terms of the perception of the hotel’s guests. “People have started to identify us with knowledge and being well versed in the arts, generally speaking.”

Understanding and integrating the arts extends throughout the Renaissance. Lund was recently honored with the Arizona Lodging and Tourism Association 2014 Hotelier of the Year award, showing how downtown Phoenix is being recognized at the state level.

For everyone in Phoenix, in the hospitality industry or otherwise, the big focus is next February’s Super Bowl. Lund indicates that the hotel is already booked by the NFL. “This is Phoenix’s chance to really show everyone what we’re about.” Between block parties and local community partnerships, the Renaissance is establishing itself as the downtown venue to showcase the urban core of the Valley. “We’ve just really chosen to embrace what this brand stands for,” Lund says of the boutique hotel. “They give you a great foundation, what you do with it is what’s so important. We have just chosen to do it on steroids.”