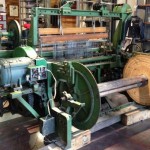 When he came up with the idea for Lawless Denim & Co. about three years ago, CEO Roman Acevedo found it a daunting task to find people skilled in sewing and leather making. But with the store’s addition of the first draper loom west of the Mississippi, he can maintain the unique quality and authentic vintage essence of the jeans, while partnering with the Arizona Opportunities Industrialization Center to train people in the industry. The 3,500-pound machine is a piece of history, originating from Pennsylvania during World War II. Bringing this sought-after, 80-year-old loom into the store on February 4th was not a small feat (it required a forklift), but there are a number of benefits it will bring for the business, its customers and the Phoenix economy.

“The loom that revolutionized the denim industry” will manufacture chambray, denim, canvas and more to speed up the production of jeans. Currently, Lawless sources its denim, which is made from pima cotton from Japan and North Carolina. “My thought was, we’re an Arizona-based company creating our own jeans here, why not take it a step further and use the pima cotton that we grow in our own backyard and make our own denim?” said Acevedo.

In the next 30 to 45 days, he expects the loom to start producing denim, after having undergone extensive maintenance. Once it’s up and running, he will search for eight to 10 more vintage looms to place in the store, which only opened in October 2013.

“The only thing slowing us down is availability, said Acevedo. “They’re very hard to find.” This particular loom was the result of intense Internet research and making new contacts, which he hopes will prove valuable in his quest for more looms. “It’s about creating that Arizona product with the very unique experience that every element done here is bespoke.”

“We could very easily charge four or five hundred dollars for a custom pair of jeans, but that’s not helping the economy. What helps the economy is people spending money, which in turn drives production, which in return creates jobs.”

In addition to the custom jeans ranging from $115 to $195, the store offers off-the-shelf jeans for $87, along with belts, denim shirts and a collection of leather products.

The store will offer customized dress shirts ranging from $85 to $145 with the option to choose the collar, cuff, fabric and monogram in the coming month.

The store’s next step in customization is nailing their own buttons made of Arizona copper and silver. Looking into the year ahead, Acevedo says his next goal is to find land to grow cotton in efforts to make environmentally-safe denim and create more jobs.

One of the most vital partnerships for Lawless has been with the Arizona OIC- a non-profit job-training program. Acevedo said he does not have the means to train people how to sew, while the OIC trains people in three-to-five month programs, teaching them the skills to work right away.

For Acevedo, creating jobs is his primary goal, and he said denim’s ageless quality couldn’t be a more fitting tool to achieve just that.

By maintaining valuable relationships with the city and the people within it, Lawless has seamlessly contributed to the growth, well-being, safety and style of people near and far with new additions and innovative ideas.