A Conversation with Kimber Lanning 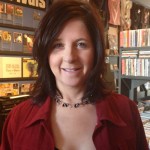 “I picture myself with my hands on the butt of an elephant.”

Kimber Lanning wears several hats. She is owner of Stinkweeds, an independently owned and operated music store and website, physically located at Central Ave. and Camelback. She is also the executive director and driving force behind Local First Arizona, a nonprofit dedicated to supporting and celebrating locally owned businesses throughout Arizona. A former board member of Roosevelt Row, she most recently was named to the board of Downtown Phoenix, Inc. by Mayor Greg Stanton.

The first challenge to interviewing Kimber is finding a sliver of time when she’s not busy doing at least three things at once. We managed to pin her down for an hour at Stinkweeds, and she gave us a peek inside her thoughtful and highly practical perspective on how to stimulate and sustain a vibrant downtown. We sat with her on the floor while she sorted a huge collection of used records she’d just received from a single collector. As she sorted and priced the vinyl, we listened. Kimber’s dad was transferred from Okinawa, Japan, where she was born to Luke AFB when she was just nine months old. She and her brothers grew up on Min Takaguchi’s farm at 59th Avenue and Northern.  Her earliest memories of downtown Phoenix are of going to concerts at Veterans Memorial Museum and to Suns games; a field trip to Shamrock Farms, where she got to eat ice cream in a little cup with a wooden spoon; and her “best of memory of all,” a 2nd grade trip to the Phoenix Art Museum to see the Alexander Calder exhibit. For years after she made mobiles (with the help of her dad) for everyone she knew.

“Suddenly then-mayor Skip Rimza threw open the door and pointed at me. ‘You!’ he said, ‘I’m giving you 10 minutes to get this organized.”

Her earliest involvement with downtown came as a musician, playing drums at Metropophobia and Peter Petrisko’s Gallery X.  In 1999, she opened Modified Arts in the old Metropophobia space on Roosevelt and it was at this point, she says, “my whole life changed.” Soon after, she heard rumblings about the potential of a new arena being built in that area and she decided to go to a City Council meeting to listen and learn.

“I showed up to the City Council meeting, not really knowing what to expect.” When she got there, the arts community was outside artfully protesting.  “Suddenly then-mayor Skip Rimza threw open the door and pointed at me.  ‘You!’ he said,  ‘I’m giving you 10 minutes to get this organized.’”

That was the beginning of her downtown activism.

She believes that the most significant changes in the last decade have been adaptive reuse policy changes. Mayor Gordon put her on the Development Advisory Board, and it was at that table that she began to learn the details of building codes and to understand what policies were making it difficult for small businesses to succeed. It was there she began to formulate strategies for how to make the changes that needed to be made.

“It was hard to see from the outside, but one of the biggest problems was that the Development Services Department back then was all cost recovery, which meant they had to balance their budget with fees and whatnot.  That created an entire culture at the city.  Because of the need to balance their budget, they loved big huge developments – it’s easier at the counter because it’s new construction and brings in more fees.” (Since that time, Development Services has been blended into the Planning Department. There are still some cost recovery elements.)

But that need to balance their budget made it nearly impossible for the small business owner to succeed.

We need to create more touch points for visitors and get more creative about connecting people to everything going on downtown.”

“In comes the guy with the wine bar in an old house,” she went on.  “What are the staff thinking? ‘He’s not bringing in fees, he’s taking all our time, and we can’t balance our budget. If we can’t balance our budget it will mean layoffs.’ So, wine bar guy means layoffs. You can’t see it from the outside, but once you understand it, you can apply pressure to make changes, draw attention to the flaws in the system, and develop strategies.”

It takes time to get under the surface and understand how a policy might have unintended consequences that can squelch growth. It takes patience to find the root, and to make the necessary changes. As Kimber puts it, “I picture myself with my hands on the butt of an elephant.” She has persevered indeed, and last fall, in recognition of what she’s accomplished, she was awarded the Distinguished Citizen Planner award from the Arizona Chapter of the American Planning Association.

For Kimber, Downtown Phoenix, Inc., is significant because it represents the first time that large and small institutions are being incorporated together to plan the future of the city. She sees her role on the DPI board as an opportunity to “underscore the not-so-obvious connections between the fine-grain, place-making stuff, and economic development.”

“To continue to grow the vibrancy of downtown,” she said, “it is critical to find ways to connect downtown to the people who work there but do not live there. We need to create more touch points for visitors and get more creative about connecting people to everything going on downtown.”

When asked what she thinks people do not know about downtown Phoenix that they should, she answered, “Twenty years from now people will look back on this as the era of the entrepreneur. Right now, we’re in it.”