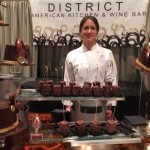 Tasked with the role of creating an ensemble comprised of at least 40 percent chocolate for a live fashion show, District American Kitchen & Wine Bar chef Winnona Herr did not take her role as fashion designer lightly. Weighing at least 40 pounds, Herr decked her model from head-to-toe, as the outfit included a chocolate corset, a skirt of modeling chocolate, and wings constructed out of a light balsa wood and then coated in chocolate. Herr sewed each leaf of the skirt by hand onto the model (all were local students) in the hour leading up to the show. Since chocolate melts at body temperature, the ultimate challenge was not leaving the model covered in a sweet brown mess. Wearing a simple leotard as a barrier, the rest of the outfit was a confection out of every chocolate lover’s dream. Considering Herr had never created “wearable fashion” before—she is a pastry chef at District—her outfit stood out for its ingenuity. “I had the idea over the holidays and in early January, but only made it in the past two weeks,” she said of her intricate creation all made in-house at District. The detailing—which included gears, gadgets, grommets and buttons—“took lots of late nights.” Chocolate’s natural dark colors, as well as the associated coppery tones, all played well with inspiration stemming from the renewed interest in Steampunk,. They also shared a Gothic/Renaissance vibe, and the always-relevant Wild Wild West, for a fashion that lent itself not only to the runway, but to the tasting table as well.

The “chocolate” hats that garnished the table were paper hats covered in chocolate and then painted with an edible powder and alcohol to look like paint, show the attention to detail the team at District put into the event, and the chocolate treats that attendees dined on throughout the night.

Chocolate vendors from around the Valley shared their sweets, with many toffees, cookies and bite-size chocolates sampled throughout the night. including food-truck favorite Paletas Betty and her Mexican Hot Chocolate flavored frozen treat. Pistol Whipped shared a variety of cupcakes, and sells their gluten-free pastries at Kaleidoscope Juice in CityScape.