A Conversation with Ed Zuercher 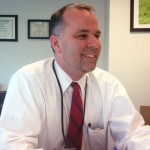 Ed Zuercher is Phoenix’s Acting City Manager and he also serves on the Board of our partner Downtown Phoenix, Inc., a community development group created to organize and galvanize downtown.

“We need to embrace the name of Phoenix and be proud of being Phoenicians.”

Ed Zuercher grew up in small towns in Kentucky and Kansas, but has lived and worked in central Phoenix for twenty years. We sat and talked with him at a favorite spot, District American Kitchen and Wine Bar, and were struck by his thoughtful, incisive style.

Zuercher began his work with the City of Phoenix as a management intern and his resume has grown to include Assistant to the City Manager, Public Transit Director, Deputy City Manager, Mayor’s Chief of Staff and Assistant City Manager.

In October 2013, he was appointed Acting City Manager, which puts him in a unique position of balancing stakeholder interests in our rapidly evolving downtown. “…people from throughout Phoenix take pride in their own neighborhoods, but downtown is everyone’s neighborhood.”

He was recently reminded of this balance at a briefing on MyPlanPHX, an initiative to update the city’s General Plan, where he learned that citizens from all over the city are interested in a vibrant downtown.

“I found it fascinating,” said Zuercher, “that people from throughout Phoenix take pride in their own neighborhoods, but downtown is everyone’s neighborhood. Everyone has an opinion.”

He sees this as a positive thing. “It’s a nice problem to have because so many people are committed and passionate about downtown. The trick is to channel it in positive directions.”

He noted that, unlike eastern cities, where the actual city is small and surrounded by suburbs with their own governments,  “all of the separate areas in Phoenix: Desert Ridge, Maryvale, Arcadia, downtown, and so on, are all part of Phoenix and share a common government. This means everyone has ownership in downtown; it’s part of their city.”

It can also make the give and take of developing the downtown a bit easier, from Zuercher’s perspective, who cited the ongoing challenge of traffic on the 7’s. People who work downtown need to get here relatively easily, but the residences and businesses that exist along 7th Street and 7th Avenue are also impacted by the crush of traffic.

“We need to find a balance,” said Zuercher, “between slamming as many people as possible into downtown and the needs of the neighborhoods, like Melrose. There’s a lot of push and pull and give and take among diverse interests that have to confront reality and deal with each other’s needs,” Zuercher noted. “If the different neighborhoods along these corridors were separate cities or suburbs, this would never happen.”

“We need to find a balance between slamming as many people as possible into downtown and the needs of the neighborhoods, like Melrose.”

How does Zuercher see the role of recently formed Downtown Phoenix, Inc.? “DPI is an exciting development in downtown leadership. Traditionally, we’ve had older, established business people sitting down with older, established government leaders and thinking big thoughts,” he said. “With the creation of DPI, small business owners, arts representatives, younger people, older people, and traditional business owners are all sitting down together. It’s a more diverse group of big thinkers, all equally excited to be with each other, and all in it for the same reason: to create a vibrant downtown.”

Zuercher understands that, from the City’s perspective, the key to working with the community is to “keep doing what we can, but also to keep listening to diverse points of view. As we listen, we’re going to learn new and different ways to do things.”

He also notes, “It’s important for community members not to let the perfect become the enemy of the good. Sometimes things get resisted or fought against because they’re not ideal.” He goes on to add, “At some point business leaders have to produce and accomplish something. We want to engage in dialogue so that the good gets better, but not have the dialogue go on so long that the good can’t happen because of an unachievable ideal.”

“As we listen, we’re going to learn new and different ways to do things.”

“The community also needs to continue to engage with the city and not get discouraged,” said Zuercher. “Roosevelt Row is a good example of that. Over the years, the city and police department made some mistakes, but Cindy (Dach) and Greg (Esser) and the rest of the Roosevelt Row people kept coming back, kept talking and listening, and things got better and better. The people in Roosevelt Row stuck with it and did not let the perfect become the enemy of the good.”

What does he think are the best things that have happened in downtown in the last five years? He cites the development of ASU’s downtown Phoenix campus,  “It’s not just the physical transformation and the people they’ve brought downtown, but ASU in downtown will help raise the education attainment level of Phoenix residents. We need to grow our median income and an important part of that process is educating people.”

He also notes the significance of the light rail and the development of CityScape, “It showed people what was possible.”

Beyond these larger projects, Zuercher is excited about the finer grain changes, like the influx of diverse (and delicious) restaurants, and the success of Crescent Ballroom.  As he points out, “These are the elements that say ‘come down and see what’s going on’ and you know there will be something.”

Some of his favorite downtown haunts include movies at Arizona Center, First Fridays on Grand Avenue, and taking his dogs to the new Hance Park dog park. In addition to the District, he enjoys eating out in downtown at Kokoro Sushi and raves about Yasda Bento, his favorite lunch spot.

When asked what we could all be doing to better promote Phoenix, Zuercher was adamant. “We need to take pride in the identity of Phoenix. It’s such a poetic, ancient name.” He went on, “We need to embrace the name of Phoenix and be proud of being Phoenicians. It’s a beautiful name, a beautiful word.”

Zuercher’s overarching perspective on downtown is both optimistic and pragmatic. As Acting City Manager and as a board member of DPI, his message of listening and learning will help bridge gaps, strengthen relationships, and create synergies that will contribute to the long-term vibrancy of our city.