Jazz for an Icon 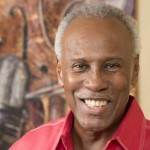 For years Valley jazz singer, educator, and actor Dennis Rowland has enthusiastically performed for benefit concerts of every kind, supporting charitable causes and fellow musicians alike. “He’s always such a great help to everybody,” says vocalist Francine Reed. “You call, ‘Dennis, we’re going to do a benefit for so-and-so — will you show up and sing a song or two?’ He’s always there, and he always performs.” She adds, chuckling, “And sometimes you can’t get him off the stage…which we love.”

In a manner of karmic reward, Rowland finds himself the beneficiary of a performance on the Herberger Theater’s Center Stage on November 6, sponsored by Remington’s at The Scottsdale Plaza Resort. It’s a concert presented by his friends and colleagues in order to raise funds as Rowland continues to recover from a near-fatal stroke and cerebral hemorrhage.

Dressed comfortably in a Harvard t-shirt and ball cap for our meeting at Urban Beans after one of his therapy sessions, Rowland is the image of fitness and health. As we talk, however, I’m enlightened by the intuitive tag-team communication technique he uses with his wife, Sydney Blaine.

Something of a pattern emerges: Rowland responds to a question with the first half of his answer, then pauses and turns to Blaine with a motion asking her to finish his reply, or rolls his hand as he searches for a word.

Occasionally he stalls mid-sentence, repeating a word as he struggles to complete a phrase. Often Rowland speaks in generalities, substituting fillers like “stuff,” “thing,” or “place” and using descriptive gestures instead of finding the appropriate noun, like a game of charades. Sometimes he figures out the word with his wife’s help through trial and error as she guesses his intentions.

Rowland’s determined efforts to regain his speech skills continue to prove a constant challenge, but his grasp of music remains firm; during our conversation he occasionally bursts briefly into song to illustrate a point, remind his wife of a specific performance, or hum along with the background music. “I couldn’t really say the tunes,” he says, “but I could play ‘em…so I started to scat [wordless singing].” He demonstrates with “All Blue” from his 1997 recording Now Dig This, a tribute to Miles Davis. Recovery has been a difficult road for Rowland, who sang with the Count Basie Orchestra from 1977 to 1983, collaborating with Ella Fitzgerald, Tony Bennett, and Sarah Vaughan. Since moving to Arizona in 1987, he’s been a frequent high-profile performer with the Extreme Decibel Big Band, a long-time substitute teacher of many subjects for Phoenix Unified School District, an instructor at Scottsdale Community College, and a popular actor in Arizona Theatre Company and Phoenix Theatre productions.

Blaine says, “The music community was…just so warm and welcoming to him.” Recalls Francine Reed, “He could sing, he’s suave, he’s good-lookin’, and…” her voice drops lower, “…a coool guy.” As an internationally touring vocalist, Rowland often works with the East West European Jazz Orchestra in Germany and Russia.  His honors include a Grammy nomination and his 2007 induction into the Herberger Theater Center Performing and Broadcast Arts Hall of Fame.

Rowland says he doesn’t remember the stroke itself. He arrived at a church rehearsal last December 19 and told the choir members, “I can’t sing today.” He adds, “I think that’s the last thing that I could say that was actually good. I couldn’t say anything else.”

Blaine picks up the story. “The stroke hit him massively, and he said he saw the white light…he essentially staggered into the chapel. The emergency responders were so concerned because he couldn’t even tell them his name.”

Rowland was immediately taken to Barrow Neurological Institute, she says. “In the emergency room they tried the safest intervention they had — only four percent risk — but he fell into that four percent and had a cerebral hemorrhage. It was really the bleeding and swelling of the brain that became so dangerous.”

The singer spent nearly a week and a half in intensive care. “It was right to the edge,” says Blaine. “No one really was sure that he would survive.” Thankfully, Rowland’s level of health prior to the stroke helped him recover even without intubation, which can traumatize the larynx and incapacitate vocalists. He’s been busy with occupational, speech, and physical therapy ever since his release from inpatient rehabilitation in mid-January. An Emmy-winning writer and producer, Blaine radically changed her routine in order to serve as Rowland’s primary caregiver and at-home therapist. Initially he required round-the-clock supervision due to the risk of clots and seizures. “He was pretty much learning from zero,” says Blaine. “I mean…it was quite a struggle…how to transport himself even out of a bed, to walk again…. He couldn’t talk really at all.”

She continues, “His heart threw a blood clot, and it lodged in the left side of his brain, so that weakened his right side. But the most significant damage was to his speech centers, and he had severe impairment — it’s called apraxia and aphasia.”

“The aphasia really impacts you — even though you know up here the words to say,” Blaine explains, pointing to her head, “that’s hard, to find the word. And the apraxia is the motor skill, physically to be able to say the word.” She adds, “It’s…both humbling and heartwarming to see someone who’s been 110% independent just learn how to tie his shoe again…to even be able to do all the things we take so much for granted.”

Soon friends began to help, and keyboardists Paul Sherman and Joel Robin Goldenthal initiated informal music therapy. Says Blaine, “Joel…printed off all the words to ‘All Blue’ because they’re primarily single-syllable…maybe just three words on a page so Dennis could focus….” She continues, “I was listening to them…practicing ‘Fly Me to the Moon,’ and just those two letters, the F and the L, are very hard to say. And they must have worked…it could have been 30 minutes just trying to say the word ‘fly.’” Rowland has always had a talent for scatting, which he’s using to find his way back to lyrics. “Not many people can scat that well,” says Reed. She laughs and adds, “I forget some words, baby, I go to scattin’ in a heartbeat. It’s what we do.”

“Well, I know that ‘Wild Women [Don’t Get the Blues]’ will be one of the songs [I’ll sing],” says Reed, “because Dennis covered that on one of his CDs years ago…he did it very well, needless to say, as he does everything.” She welcomes the chance to perform for her friend’s benefit. “This would be a natural honor for me,” she says. “He’s the man.”

Rowland and his wife hope for a good turnout at the Herberger, and local celebrities — ranging from Mayor Greg Stanton to Beth McDonald to Al McCoy to Michael Barnard — have created promotional video snippets on YouTube. “It’s going to be a really incredible concert,” says Blaine. “We didn’t want a traditional charity event — we wanted everybody to come and enjoy some amazing music, all for such a good cause. The Herberger was the natural choice, of course…and it’s kind of like his home base.”