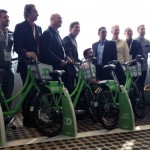 Phoenix Mayor Greg Stanton today unveiled the name and logo for the region’s new bike sharing program before attendees at the National Association of City Transportation Officials at the Hotel Palomar.  Called GRID, the system will employ a fleet of fluorescent green bicycles that are rentable by the hour or through annual memberships.  The bikes are emblazoned with an upbeat, smiling logo, and encourage users to “ride happy!” GRID is ready for action.

“GRID is going to be a fun, healthy and affordable way to extend the reach of our transit system for residents, commuters and visitors,” Stanton said, noting that approximately 50 other U.S. metro areas will have similar programs in place by next year.

“If our region is going to compete globally, we need GRID to help attract those high-wage employers and bright, educated young workers who want livable cities and multiple transit options.”

Stanton said the Grid Bike Share name speaks to the many connections that link the neighborhoods and communities throughout the Valley, which was planned and built on a “grid” network of streets. Where will go on GRID?

CycleHop, LLC has been contracted to establish and operate the new bike share network that will include up to 500 bicycles throughout the city of Phoenix, followed by another 500 in Mesa and Tempe. Using the most up-to-date bike sharing technology available, users will be able to make reservations, purchase day passes or longer-term memberships at kiosks, online or via smartphone apps. GRID’s “smart bikes” are equipped with solar-powered, GPS-enabled locks, and can be parked at any of the special kiosks or traditional public bike racks, providing users immense flexibility and convenience.

For more information, go to GRIDBIKES.COM.