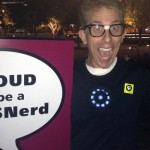 There was a gathering of heroes in Downtown Civic Space Park last night to strut their stuff and watch the Eight, Arizona PBS screening of part one of “Superheroes: A Never Ending Battle” – a three-part documentary celebrating America’s enduring comic book culture.

Organized by Bob Beard, Promotions and Events Coordinator for Eight Arizona PBS, a self-proclaimed nerd and pop culture expert, the event brought out die-hard fans, little nippers getting their first taste of costumed superhero glory and everyone in-between.

Local improv theater performers with The Torch Theatre were on hand to riff on superhero lore and shared their personal favorites with DPJ. José Gonzalez grew up loving Superman because of the Christopher Reeves movies, but has switched his allegiance to Batman. “His stance against guns is admirable, and he’s maximizing his human potential. He’s not an alien, he doesn’t have superhuman powers, but he’s pushed himself to be superhuman.” Arturo Ruiz, likes both Batman and Superman. Discussion ensued about why it was wrong to take Superman’s shorts away in the latest movie. “His red shorts are relevant because back when Superman was created super strength was represented by images of strongmen and wrestlers. What did strong men and wrestlers wear? Tights and shorts!” Tommy Cannon likes DC Comics’ Plastic Man and Marvel’s Silver Surfer because both are flexible and limitless.  But, he said, “Plastic Man ultimately beats out the Silver Surfer, though, because he can be anything.” Guido Martin was all about the Hulk, because “even though he can be as dumb as a box of rocks, Bruce Banner is just channeling the suppressed rage of an abused kid. He’s always trying to channel that rage for good.”

Mack Duncan showed up with his Green Lantern ring in place. “The ring makes anything he imagines real. There’s a real connection between the Green Lantern Corps and improvisational theater. If you’re part of the intergalactic police force, you need to be ‘fearless, honest, and limited only by your imagination.’ It’s the same with improv.” While event organizer Bob Beard was sporting a way cool Iron Man t-shirt complete with a glowing mechanical heart, his real heart belongs to Superman. “But not,” he said, “‘The Man of Steel’ version. I don’t like what they did to the character. It would have been an okay movie if it was called ‘Ultra Dude,’ but it wasn’t.”

There was all around consensus that Superman needs his red shorts. Another highlight was the appearance of various members of the Justice League of Arizona. This eclectic group of superhero aficionados makes volunteer appearances for charity events and many have made their own fabulous costumes. Ryan Holmes’ was the 1940’s golden age version of The Flash. Brian Korzec was the Green Arrow, Kyle Rayner constructed an “old west” version of the Green Lantern, and Crystal Bien rocked her Catwoman persona.

As Councilman Michael Nowakowski made his way through the costumed throng, he told us that his favorite superhero was Batman. “I grew up with the Adam West Batman,” he said, “I loved the ‘POW’ and the ‘WOW.’”

To catch all three parts of the superhero documentary, visit the Eight Arizona PBS website for the schedule. Then embrace your inner nerd, grab your cape and leap some tall buildings with America’s coolest comic book heroes.

Want to really nerd out? Pick up a PBS Nerd T-shirt, the perfect thing to wear during this Saturday’s Nerd Walk.