Changing of the Guard in Downtown Phoenix 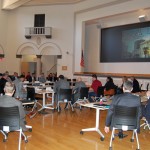 Downtown Phoenix Partnership Inc. (DPP) today held a regular meeting of its Board of Directors at University of Arizona College of Medicine, in the Virginia G. Piper Auditorium. Photo by Al Bravo. Courtesy of University of Arizona.

On the agenda was an impressive number of changes to DPP’s board and officers, including nominations, officer appointments and shifts of some board members to the Board of Directors for Downtown Phoenix Inc. (DPI).

Existing Board members reappointed to the board:

Officers Don Brandt and Mike Ebert have now departed the DPP board to join board of DPI. Given this, the Nominating Committee of the DPP board recommended the following slate of DPP Board Officers, effective immediately and running through December 2014.

Also on the agenda was an update from David Krietor, CEO of DPI. In addition to Brandt and Ebert, Derrick Hall (Arizona Diamondbacks), Jason Rowley (Phoenix Suns) and Ed Zito (Alliance Bank of Arizona) will be departing the DPP board to take seats on the newly formed Board of DPI. See the full list of DPI Board of Directors here.

Krietor also announced that an affiliate agreement between DPI and Phoenix Community Alliance has now been approved, and Dorina Bustamante has been hired as a consultant to support PCA’s membership development efforts.