Downtown Dogs Have Their Day 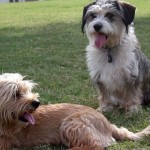 Friends of Hance Dog Park members Lisa Krueger and Kate Kunberger wrote the following article about the newest downtown hot spot for dogs and their human companions to have fun together.

Downtown dog owners are counting down the seconds until the opening of Hance Dog Park on Saturday, October 5 at 8 a.m. Hance Dog Park is an off-leash dog park located between 3rd and 5th Avenues, just north of I-10 and south of Culver Street in the historic Roosevelt neighborhood of downtown Phoenix. Addie and Kili at rest. Courtesy of Kate Kunberger.

Area residents have been actively involved in planning this dog park for over three years.  Beginning with the call for a downtown dog park that led to the creation of the 70 person “committee,” to the Hance Park Steering Committee sessions over the location, to multiple city council meetings with active public involvement and comment, to the negotiations with the neighboring community about the logistics and aesthetics of the park – downtown residents have been involved every step of the way.

Throughout the planning process, a consistent theme emerged: people not only want a secure place where their dogs can exercise off-leash, they want to make the dog park an integral part of their community. This strong sense of stewardship and community led to the formation of Friends of Hance Dog Park, a group of downtown dog lovers committed to making Hance Dog Park “our” park by working in partnership with the City of Phoenix Parks and Recreation Department to ensure that it is a clean, safe, and enjoyable park for local dogs and their owners. But the process was not without complications. The location of the dog park sparked community debate, tapping into existing concerns about urban design, visitor parking, and outstanding issues with existing downtown parks. When the City Council identified Hance Park as the location, another round of meetings took place that addressed issues of activation of the public areas of Hance Park, incorporating the dog park into the redesign, and minimizing impact to the adjacent neighbors. Each proposed location had its advantages and disadvantages, supporters and detractors.

Once the location of the dog park was selected, the City engaged in several rounds of small-committee meetings to assess the specific concerns of the neighboring residents and the dog-park users. These concerns influenced numerous aspects of the design process. For example, to address the noise and aesthetic concerns of the residents closest to the dog park, a gabion wall was designed by the City and plexiglass panels were incorporated to ensure visibility. When the City proposed building a single park, dog owners voiced the need for separated small/large dog areas and worked to get the second park reinstated. Through this process, Friends of Hance Dog Park emerged as the voice of the community in working the City Parks and Recreation Department. Indeed, Friends worked with the City to supplement the City’s budget in order to upgrade or add amenities to the park, such as upsizing the shade trees and adding additional seating.  Even though the park has not yet opened, Friends of Hance Park has raised and donated over $10,000 – and put it on the ground.  Friends consulted with the park’s designers regarding the location of the amenities and other user concerns.  And, Friends is partnering with the Parks Department to organize and present the grand opening celebration.  Friends President, Bob Diehl, notes that “Friends of Hance Dog Park is the first ‘friends’ group in support of a Phoenix dog park, so we are breaking new ground in creating the communication channels and exploring the various ways the community and the City can work together in support of a dog park.”

Friends will also promote a culture of cleanliness by encouraging good citizenship (pick up after your pets and encourage others to do the same!), as well as monthly clean-ups of the dog park and adjacent common area.  The Friends website includes “etiquette” guidelines that supplement the City’s rules and encourage good clean play (for dogs and users).  Friends of Hance Dog Park has “adopted” the dog park from the City of Phoenix Parks and Recreation Department. The volunteer clean-up crew will meet on the first Saturday of every month at 8 AM to pick up any pet waste and other debris in the dog parks and the common areas. Other activities are in the works as well.  Friends is encouraging the community to join them to help achieve their mission of keeping Hance Dog Park a safe, clean and enjoyable dog park for dogs and their owners. Membership in Friends of Hance Dog Park is open to the public for $10 per person; $20 for family membership; $100 for associate (corporate) memberships. Join Friends and help to keep Hance Dog Park a clean, safe, and enjoyable place for dogs and their owners.

Where: On Culver Street between 3rd Ave. and 5th Ave.