The Art of Sweating 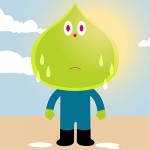 As much as you want to hibernate during the summertime, it’s not always possible, especially if you decide to get off your butt to go for a walk. Downtown Phoenix, with all it’s shaded streets, misted outdoor seating and (more) condensed living and doing, makes it more likely that you’ll be sweating on your way to somewhere.

Sixteen summers in Phoenix as a bicyclist, runner, walker, person-driving-a-car-without-air-conditioning and user of public transit has helped me develop a keen sense of managing the near six months of persistent sweating. I also just don’t like looking a mess wherever I end up.

While some people decide to use saunas, Phoenicians have the benefit of a dry sauna right outside the door (or sometimes just sitting close to a window). Luckily, living in this climate alters our bodies so that we actually sweat more (see #13 in the link) than people living in milder climates. Don’t be a sweaty character. Image by istockphoto/Jen Urso.

As icky as some people find it, sweating is actually hugely beneficial. Not only does it help keep us cool but it also helps blood flow and fights harmful bacteria on the skin. Think of it as your own self-contained insect repellant. All of this purging of toxins and destroying of bacteria might also be what gives us a healthier glow. Maybe this is the reason why everyone in Phoenix (except for the leathery ones) look ten years younger than they actually are.

To live here, and other equally sweaty cities, it helps to have a refined craft of coping with the inevitability of sweat. Now is the time to tap into all those problem-solving skills that an artist might use to make a piece work. I like to make sure I employ all the proper materials and methods.

If you’ve decided to be a brave soul who sticks it out for the summer, here are some useful sweaty survival tips.

Even though the National Weather Service and every other resource out there suggests how you should dress for excessively hot days, it still doesn’t always sink in. As in art-making, materials are important. Cottons and linens are really the only way to go (Supplex is a possibility, too, if you’re going to do anything active). Synthetic fabrics do little other than trap heat, trap sweat and trap stink.

Be your own swamp cooler

It was my first summer with a studio on the second floor of the non-air conditioned Icehouse when I was given some of the best advice of my life. Owner, Helen Hestenes, told me how she would douse all her clothes in water and sit in front of a fan while working there over the summer. I tried it and ended up feeling almost too chilly. It made it a little difficult to work on more delicate projects like drawings (dripping on paper not recommended unless you can bind it conceptually with the work) but it prevented me from leaving my studio half delirious. I use this tactic now every time I get on my bike to ride longer than a few miles. It’s easy: just take a shower with your clothes on.

Be mindful of your color choices

Keep in mind as you venture outside that no matter what you’re wearing, you will sweat in it so, consider the colors. Imagine yourself as a cool, reflective painting that blends well with water. Yellows and whites are awesome because you can’t see much difference between wet or dry. Certain other colors don’t fare so well. Light heather greys or a bright green seem to show sweat the most. You don’t want to be caught in that awkward moment getting out of a car or train and realize that it looks like you’re wearing a pair of sweat underwear. Black, navy and dark grey work great, as long as you don’t have to be in the sun. Just don’t blame me if you find your thighs catching fire while riding in the passenger seat of a car.

Bring a change of clothes

You don’t have to bring an entire change of clothes but it doesn’t hurt to have a fresh shirt to quickly change into in the bathroom of wherever you’ve ended up. (Which also brings me to the point of showing up extra early to “de-sweatify” yourself). This way, you don’t run the risk of sweaty clothes going sour. You could also just try throwing something on over what you walked or biked in but I personally prefer ridding myself of any sweaty remnants. Generally, it’s been acceptable for artists to look disheveled and nearly homeless but I personally prefer allowing my better side to shine when I’m not working.

Know all the places with the best shade and air conditioning

A lot of places in downtown are pretty old, and likely were built before central A/C was widely used in the 1950s (the modern version was actually invented in 1902.) Some have updated but some have either swamp coolers or an old a/c unit that is so inefficient, owners end up supplementing it without about 18 just as inefficient old fans. Some of my favorite stops include the new Cartel Coffee location on Washington and 1st Street, Moira Sushi (nice and dark in there), Café at the Downtown Phoenix Market (iced regular or carbonated water with lots of lemons to help the muscles recover), Nami (with the benefit of having a chilling Tsoynami) and any place with a water feature outside. We should also not underestimate the power of lawn sprinklers that can so refreshingly cool us down during a walk while you’re pondering the frigidness of the universe.

There’s really no way to avoid it–you’re going to get sweaty. Hopefully, this list of suggestions will get filed into the ranks of suggestions you just might remember that day when you’re on your way to a meet-up in the middle of the afternoon, on your bike, when it’s 110 degrees outside. These are just some of the ways I’ve managed to survive (there are many others that usually involve popsicles).  The DPJ community could always benefit from more in your comments below. Now, in case I didn’t say so, drink more water and get out there.