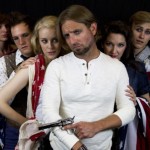 In the fledgling years of the United States of America, the hot-tempered and fiercely patriotic Andrew Jackson rose from obscurity to become the seventh President, following John Quincy Adams and preceding Martin Van Buren. Along the way, Jackson’s controversial path included defeating the British as a general in the War of 1812, serving as first governor of Florida, fighting accusations of an adulterous relationship with his own wife, establishing the Democratic Party, defending his contentious policies leading to the forced relocation of Native Americans, and representing Tennessee in Congress.

Impressively, he was also beloved by the American public, winning the popular vote. Jackson was elected by a tremendous margin in 1828, but his victory in the Presidential race was overshadowed by the death of his beloved wife Rachel.

Jackson’s action-packed life story is fascinating, but is it the stuff of theater? Phoenix Theatre took a well-justified, successful gamble with its run of Bloody Bloody AJ performances, which ended June 23. “This isn’t an encyclopedic account of Jackson’s life,” said director Ron May. “You’re not getting a stage version of a Wikipedia page. There are a handful of blatant anachronisms cozied up right next to historical fact,” he continued. “But for the most part what happened, what he did, is dead-on.”

May has made his name in the Valley theater scene both as an actor in shows like Nearly Naked Theatre’s Fuddy Meers — including ovation-winning scenes with a sock puppet — and as Stray Cat Theatre’s founding Artistic Director, offering works like The Dianalogues, columbinus, and Learn to be Latina. May has also directed for Actors Theatre and Black Theatre Troupe.

He’s always drawn to the works of Alex Timbers and Michael Friedman, who also wrote Very Merry Unauthorized Children’s Scientology Pageant and Heddatron for their theater troupe Les Freres Corbusier in New York. ‘They have a wicked sense of humor, an enormous awareness of pop culture, and an off-the-wall sense of theatricality,” declared May.

“[Bloody Bloody AJ]…does for history what ‘The Daily Show,’ for me, did for daily news — made it accessible, interesting, relevant, and a hell of a lot of fun,” said May. “America at the time was a young nation — kind of prepubescent, still trying to find its footing.” He continued, “Andrew Jackson ultimately becomes its mouthpiece — the best front man you could possibly have for an ‘emo nation.’” May added, “The show is like an insane mash-up of ‘Schoolhouse Rock,’ ‘South Park,’ and a Fall Out Boy concert.”

Actor Joe Kremer described the play as “like a parallel universe. It’s in the history, but it’s all these modernizations of language…. He [Jackson] says stuff like ‘This sucks!’” (some of the most PG-rated dialogue in the show, which carried provocative “mature audience only” warnings).

At the same time, the piece revealed glimpses of Jackson’s personal and ideological vulnerabilities, bolstered by the pleasantly enjoyable shock of Caleb Reese’s clear, melodic voice in the title role, which pointed to his nine-year run with busy local cover band The Instant Classics. “Henry Clay’s just kind of funny, and just like an old, grumpy politician…I would call it ‘My dad in a bad mood on a Sunday morning,’” he said, laughing. “Black Fox is a lot more stoic, and…at the end of the show, very serious.” Kremer concluded, “Black Fox is more me, where Henry Clay is more of a portrayal of a character — let’s put it that way.”

As for using Kremer in the role, May said, “The show was written so that non-Native actors could play the Indians, but…[the] biggie is making sure we represent the Indians in the show in a way that isn’t offensive, doesn’t simmer in stereotype.”

Regarding the production as a whole, Kremer said, “It’s tight jeans, big boots…. When you wear it [the costume]…it’s this eyeliner feeling.” He continued, “I think that’s the big difference — I mean, you could do a show about Andrew Jackson and the 1800s…just based on what’s there…but how fun would it be?” Kremer said, “I have a 16-year-old daughter…there is no way I could get her to sit…and watch a documentary about Andrew Jackson. It just wouldn’t happen.” He chuckled wryly. “But I could get her to sit in the show and…actually be interested in who he is and what he did and…‘Wait a minute — what did he do? Indians? Why would you do that to people?’”

He started his acting career in Nearly Naked Theatre’s 2002 production of Equus, starring with May in Fuddy Meers and Take Me Out and working under his direction in The Laramie Project and other shows. The actor’s credits include Noises Off, Dead Man’s Cell Phone, Much Ado About Nothing, [sic], and, most recently, Phoenix Theatre’s run of Our Town.

It was a bit of a jump turning from Thornton Wilder to Andrew Jackson, admitted Kremer. “How different is it? Uh, wow… I don’t know how to describe it without some drug reference,” he said with a grin, “because…it’s kind of going from this realm of seriousness…to just this constant thing of laughter…so it’s a very different vibe.”

“Going from drama to comedy…it hits a tightrope, because you come into it still in that dramatic role. It’s difficult, but it’s doable,” continued Kremer. “One of the things we did with Our Town…we took away a little bit of the reverence,” he said. “So once the reverence is gone, going between those two is pretty easy, because they’re [both] shows, they’re just a little different, and you have to just pay attention to what’s in the text, and that’ll guide you into good places.”

Watch for May’s upcoming productions at Stray Cat Theatre and other venues around the Valley. In October, you’ll have a chance to see Joe Kremer as a conflicted Chicago police officer in the dark, gritty comedy A Steady Rain by Keith Huff, produced by Actors Theatre.