Get Off Your Butt and Go For a Walk 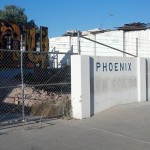 “We should go forth on the shortest walk, perchance, in the spirit of undying adventure, never to return, prepared to send back our embalmed hearts only as relics to our desolate kingdoms.”– H. D. Thoreau On Buchanan St., behind Chase Field.

Artists Vito Acconci and Sophie Calle followed people (for Calle, until someone confronted her). At one time, Francis Alys walked into unfamiliar territory guarded by dogs and at another, pushed a block of ice around Mexico City until it melted. Paolo Nazereth walked from Sao Paolo, Brazil to New York, NY in a pair of flip-flops (he needed to see what was in between.)

Whether to execute a work or to just get out of the house, walking can provide great source material or at least allow a moment for quiet reflection on the place you’re in. looking down at Adams and 3rd Ave

One foot goes forward, then the other. A pattern develops. Eventually, after doing this many times, the distance stretches and your body is some place else. When you’re out walking somewhere, there’s time to see the space around you and even stop and approach the things that interest you most. With the advent of Instagram, people can post a photo of that thing that no one else has ever noticed. When you’re out walking, it’s as if that little thing you noticed was just for you…until you share it with the universe. I rode my bike over the Rio Salado on 24th Street and saw a white crane wading in the shallow water. While out on a morning run, I navigate the back streets of South Phoenix before anyone is awake, running down dirt embankments going the wrong way down a one-way street. While walking through the grove of trees next to St. Mary’s Basilica during late summer, I become inundated with the singing of cicadas who seem to only gather in that safe, cool(er) spot. Walking, running, biking—they are the processes that put our bodies in direct contact with the world around us. For artists, it can make one aware of how systems fit together, materials blend, colors merge and contrast, how light hits an object, how people move around each other and how every unit functions like a giant collage of complex, moving objects. For anyone else, it can give one a moment to slow down and take stock of the landscape, urban or otherwise, and how it just feels good to be able to move oneself forward in it.

“the rich potential relations between thinking and the body…the way walking reshapes the world by mapping it, treading paths into it, encountering it” — R. Solnit

Ten years ago, you may not have seen anyone walking the streets of Downtown Phoenix on a summer evening. But now, 110º doesn’t seem to stop anyone. This past Friday, as the temperature reached 111º right around 6pm, a bevy of Phoenicians were stepping out of air conditioned cars, houses and buildings to begin instantly sweating on the hot sidewalks. It has become standard practice now to throw heat exhaustion to the wind in lieu of walking the streets to socialize, see art and experience something new.

What was once underrated and scoffed at as being foolish, boring and even dangerous is beginning to be common practice in Downtown. There are more places now to walk to but there has never been a lack of places to walk. Within every landscape are smaller and smaller bits that pull and drag you in if you let them. While out walking, a person can let that different, sensorial world back in to admit that there is something more here than generalizations formed from the view of a car window.