In the Soil and In the Studio 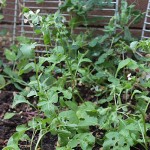 After years of failed attempts with dried-out, wilted, stagnant growth, I seem to have become capable of growing a very small amount of my own food. Most of the time, I’m happy when anything grows. The simple idea that I can put a seed in the ground and someday, maybe, eventually have food never ceases to boggle my mind. Working in a garden seems so similar to working on an art project. There is concentration, making adjustments, picking, leaving something alone, adapting and failing. Every time, you start with nothing and by the end (hopefully) you have something.

In both situations, you have an idea. You prepare to enact that idea. You toil through experimentation, a variety of tactics and the passage of time. Ultimately, you might Initial gardening attempts were with seemingly indestructible cactus. Some still died. Many survived.

end up with what you wanted to create but if not, the end result could still be a new, other, interesting thing. You’ll learn from it. Maybe this is the reason why I always seem to be running into artists who like to garden.

I should start out by saying that I would never in a million years call myself a “gardener.” I hide in the shadows, planting things and hoping no one notices my poor technique and sporadic practice. I assume that somewhere around the corner, there is a master gardener shaking his or her head at me in bewilderment and disdain. (This is all very similar to not wanting to be identified as an “artist” until I’m actually proud of what I’ve done).

Lucky for me, there are plenty of fellow artists here in Phoenix who know a lot more about growing things than I do.

Lots of artists are independent do-it-your-selfers who would rather figure out how to do something on their own than have someone else do it. Painter, chicken-raiser, gardening knowledge guru, and former board member of the Valley Permaculture Alliance Rachel Bess, suggests that “(It) seems like there’s a pretty strong parallel with creating complex things from seemingly humble materials.”

If you’re a painter, you start with paint and canvas. If you’re a gardener, you start with seed and soil. Artist Mary Lucking says, “Maybe it’s the pleasure of creation without the pressure of meaning.” We can toil and adjust and allow the growth of the thing be the meaning itself.

The act of experimentation also plays into it.

“One thing I really like about it are the surprises. You never know for sure which things are going to do well and there are always strange things that pop up,” Bess says. Although you can control a lot in a work of art, you still have to fight or work with the fussiness of your medium.

Artist Melinda Bergman, who was raised in a family that grew food on over an acre of land also tends to use chance, stating “I don’t care so much about getting a great big harvest and I like to experiment.”

Many people will say it’s like meditation, which can also be true for some artists who use painting or sculpture to relax or calm. For the rest of artists who spend days troubled over a creative block or impasse in execution, staring at plants in a garden can be a welcome respite.

Mainly, gardening and art-making seem to be equal acts of creation except with one, you might get to eat at the end. Both acts are very much about our humanity. 20,000 years ago we were drawing figures on cave walls, fashioning tools and in the beginning stages of planning cultivation. We wanted to make.

Bess says, “It gives a very basic sense of success at being a human being.”

Artists have been deemed special for the creative skills that come naturally to them, but maybe it’s more naturally human than we think, like growing food. As Melinda Bergman told me, “Gardening is normal. It needs to be even more normal. Maybe they (the artists) want to be normal instead of special.”