The Business of a Strong Creative Community 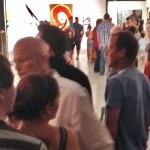 Last Saturday, Artlink’s Silver Gala brought together Detour supporters past and present in honor of Art Detour 25, March 2 and 3,  Inspired Connections’ Chief Connector Rhonda Bannard remarks on the evolution of the arts in downtown Phoenix reminds us of this community’s strength and encourages further connection with business leaders to propel us to the next level of success.

In 1993, I jumped into the position of downtown [Phoenix Partnership’s] marketing manager. My first assignment was to help the Suns and the city prepare for the NBA playoffs and a parade of what turned out to be 350,000 people downtown on a 115 degree day. It was quickly apparent that supporting the arts & cultural community was critically important to the revitalization efforts that were beginning to take shape.

My boss at the time – Margaret Mullen – was at the forefront of negotiating deals for artists in the Jackson Street studios. It may not be a happy memory for many artists, as the studios needed to be relocated for the Arena to be built. She shared with me that it was Mayor Terry Goddard who said we needed to figure out how the business community could keep the artists downtown and not have them scatter across the Valley. Consider how that set us up for where you are today.

Margaret said that it is often the artists who had the guts to go in early and see the revitalization opportunities waiting to happen. The Icehouse on Jackson Street, one of the last remaining art spaces in the Warehouse District

I remember meeting artists Sevak Khalsa, Greg West, and Otto Rigan in the early years and how Jackson Street was one of the top places to visit on Art Detour. I remember hearing Beatrice Moore’s name often.

And I remember being told to help out Art Detour however the Downtown Phoenix Partnership could.

From arts to theater to the tiny Arizona Science Center with the Swensen’s Ice Cream shop next to it – those early days for arts and culture were not easy.

Tonight we celebrate the early pioneers who paved the way for the possibilities of today.

The first gallery owners, the early downtown artists, and those passionate volunteers with Artlink – many still active in the community today – all made it possible for tonight’s celebration.

I don’t have to tell you that it’s been a challenging road. And sometimes you can still hear the same challenges and complaints leveled in the effort to sell the value of the arts to a vibrant city center.

Yet I would submit you’ve proven the potential – whether it’s seen in the “must do” First Fridays, or the burgeoning Third Fridays and more intimate arts meet ups.

The business community and city are starting to speak your language. They just come at it from a different lens. They realize that they are competing for workforce talent – and the one common denominator of talent is to look to the creative. So looking at 25 years and beyond for Artlink and the downtown arts community – what’s next?

1,500 chief executives noted “creativity” as the most important leadership skills needed for successful ventures in the future – according to an IBM’s survey through its Institute for Business Value. The findings noted that they understand the power of an innovative individual and the creative thinking and collaborative mentality they bring with them.

They’re even beginning to advocate for it in schools.

Well, as we know, Arizona is usually behind such trends, so here are some ideas that could help us move forward:

The intrinsic benefits of arts are many – they sooth, provoke, connect us, connect cultures. It’s essential to the health and vitality of our community – it makes new business possible, tourism probable, attracts skilled and educated workers – especially if we begin to consider and harness the growing power of the younger generations. Let them know they can tap your talents when pitching for business.

Business scholars are already recognizing that creativity is at the leading edge of innovation. In Massachusetts a “creative economy director” is part of their statewide economic development strategy.

In D.C. a mayor’s summit is held on the creative economy to connect arts to community and help local businesses.

In one MBA program ranked first in entrepreneurship, students are required to take art classes. Same with those in another college’s engineering program. They believe that creativity allows for quantum leaps in knowledge.

Great points, great message. One that now requires us to translate it to those who need to hear it.