Giving a Crap About Where You Are 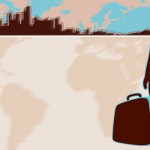 It happened again — another announcement in my inbox about a show where artists explore the concept of space or place.

Last week there was one for a panel discussion, one for a workshop and one for an international symposium. Then today, I received an announcement for A Space Called Public that includes “diverse works by twelve artists from different countries with the aim of generating a new conversation about the concept of public space today” that takes place in Munich. I also found one called the Home Base Project: a site-specific residency in Berlin that explores the notion of home and even has an aptly named “Nomadic Residency” that takes place in different locations around the globe every year. One thing about these events is that they never seem to happen in the same place twice.

All of the these events and shows have us scurrying around to different locations in order to learn about a sense of place. We end up having to dislocate ourselves in order to figure out where we are. I begin to wonder why this is now such a prevalent issue with contemporary artists.

Within the globalized, internet-ed world, it is no longer really necessary for artists to uproot themselves and permanently move to a cultural center. It could definitely help to be entrenched in an active community but plenty of artists find it sufficient to stay at their home base to network themselves and their work out into the world. In order to do this, many find themselves applying for artist residencies which have increasingly become the method in which we can temporarily connect with other artists, institutions, critics, curators, and writers while having the time to concentrate on a solid body of work.

As we uproot ourselves for a short while to become familiar with foreign territory and accustomed to a new way of doing things, it’s no wonder we might begin to think about where the hell we are. What is “home” after all? Who is your “community?” How does a person feel comfort in a new place and then become capable of making a new, meaningful work? The first thing that might come to mind is “Where am I?” as well as “Who am I in this space?”.

Even for those who stay put and apply to calls for work increasingly find projects and shows questioning our concept of space. Take the City of Phoenix’s recent call for Cultural Connections (made possible through an Our Town grant from the NEA). This is a project intended to connect our underutilized spaces and “revitalize” them through a series of art pieces. The IN FLUX project that began in 2010 (which has now joined forces with other Valley cities) has worked towards reinvigorating vacant spaces and storefronts while providing programming that connects people to them. Both of these projects focus our attention on how the spaces that we regularly traverse might have meaning to us. They attempt to tie us into our environment. Why do we feel so lost?

The apparent availability of everywhere via the internet and the ability for more people around the globe to access the internet creates a flattened illusion of place accessibility. We can see more and be in touch with more people, as well as the perspective of their work, so that it no longer feels satisfactory to stay in one place. With the whole world out there, it seems provincial and limited to want to become established in one spot. Additionally, artist residencies and curators from around the world have tapped into this desire for artists to expand their scope and be involved in the larger network that becomes the art world. The sacrifice just might be not knowing where you are when you wake up in the morning.

Naturally, it seems the dialog and the work itself might turn to thinking about the very fundamental question of where we are. While these shows, discussions and symposiums aptly question how we look at the spaces we occupy, they also crave for us to come from different perspectives and locations — a confusing and ironic twist. We must be diverse and adaptable enough to remove ourselves from what we might consider to be our “place” in order to step back and assess it for others.

For the artists of Phoenix, this stepping back and forth — moving away for a residency and coming back after three months — might actually help with the identity crisis this city has been accused of having. Or, all this running around and flying to different locations might just give us perpetual jet lag and a hazy sense that this place is like that place. Or, it’s very possible that all these discussions and exhibits might just be pushing at the sense that we’re not really sure what a “place” is anymore.