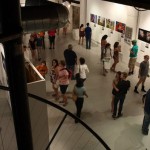 There are just a few seats left! Reserve your spot on the Third Friday Collectors Tour on January 18! monOrchid is one of three galleries on the Third Friday Collector’s tour.

The participants will have a private viewing and the opportunity to meet the artist(s) and curators one-on-one, and learn more about their processes and vision.

The exclusive guided trolley tour will include:

The tour will be hosted by Robrt Pela, Willo North curator and arts critic for Phoenix New Times, whose NPR “Morning Edition” radio essays are occasionally themselves the talk of the town. Pela will provide context on the contemporary art scene in downtown Phoenix and background on the artist spaces and galleries on the tour. Robrt Pela is known primarily as an arts critic for Phoenix New Times, where he has written a weekly columnthese past 22 years. His radio essays air each week on National Public Radio’s “Morning Edition,” and he’s worked as a writer and editor for national and local magazines including Psychology Today, The Advocate, Phoenix Home and Garden, and Men’s Fitness. His last published book was Filthy, a biography of the film director John Waters.

As a curator, Pela presents a new exhibit each month at Willo North Gallery in Phoenix. Last year he curated shows by, among others, Annie Lopez, Jeff Falk, Jason Hill, Janet de Berge Lange, Paul Wilson, Carolyn Lavender, and Bob Adams. He and his spouse, Todd Grossman, divide their time among their homes in Phoenix, Arizona; Niles, Ohio; and Bargemon, France.