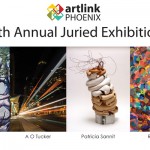 The top three selections will be announced at the Opening Reception, this Thursday, September 4 from 6 – 10 p.m.

“This year’s exhibition is extraordinary. We were inspired by the diversity of submissions we received from so many talented Arizona artists. We’re looking forward to sharing this amazing show in the iconic Icehouse white column gallery,” said Sarah Levi, Vice President of Artlink.